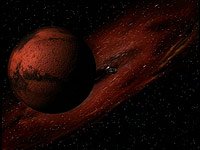 What does this film give us? A rather decent looking monster, an all girl college and lots of goo and monster attacks! However, despite all that, it was still rather bad. Granted, it was entertaining in a bad way, but this thing should have been able to get a five or six from me and instead I am giving it a three. It just missed the mark and though it featured copious amounts of girls and goo and police searching the most elaborate basement ever for a college campus it left me thinking it should have been much better.

The story has a meteorite crashing upon a campus and a girl and monster emerge from it. Then we get a very annoyed head of the college getting the janitor to clean up the mess as the art teacher goes ahead with his class. As far as one can tell, the head of the school, the art teacher and the janitor are the only three people working at this school. Well the monster begins making its move ever so slowly as everyone just wants to wear a piece of the meteorite and sleep with the art teacher and settling for the janitor when art teacher is too busy with attractive blonde girl! Then we get lots of footage of the basement as they try and save space girl and the rest of the missing girls who they do not really try too hard to save and instead elect to just shoot them.

The film could have been rather decent, but it moves a bit slowly at times wanting to focus on the head police guy thinking the art teacher is guilty of something with virtually no proof. Then there are head scratching times as the art teacher stops the blonde girl from attacking by removing her meteorite piece, but neither of them do this with the girls underground and instead blast away. It is also rather sad an art teacher handles the fight underground with the girls running around attacking, better than the police did with just the one monster!

So, it is worth a look see and a few good chuckles and I really thought the blonde the art teacher was hooking up with was very attractive reminding me of a girl I had a crush on in high school. Too bad they were unable to make a really good movie as there are too many parts of the story that just do not work or make sense, like what was so awesome about the meteorite that everyone wanted to wear it as a necklace and how would the monster even know they would because it could control people who wore it? Still, lots of goo to go around for everyone!