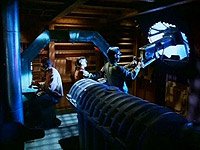 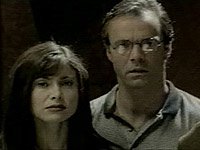 Although I'm a huge fan of Australian martial artist Richard Norton, I feel that this cheap science fiction film hardly showcases him at his best. Instead it's a dead-headed B-movie that copies the best bits of DIE HARD and THE PHILADELPHIA EXPERIMENT, showing how the crew of a futuristic submarine travel back to the present day after an apocalypse, attempting to prevent the course of history through violence.

It sounds largely interesting but in terms of execution this isn't. Most of the running time is made up of sub-par action on a ship, but UNDER SIEGE is ten times better than this. The action is frequent but lightweight, and Mr. Norton doesn't even get to show off his superior fighting skills, thanks to the lacklustre direction. The whole thing looks and smells cheap, with lousy acting from the supporting cast and lame dialogue.