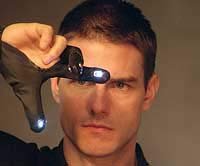 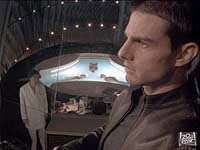 If I have many complaints about Minority Report, it is because in many ways the movie came close to being very good. Unfortunately, it ended up falling short too many times for it to earn a place among first-rate movies.

Story: To the movie's benefit, there are many strong story points. Three precognitives (precogs) predict murders so that murder can be prevented. Anderton (Tom Cruise) leads a team faced with the challenge of preventing the murder once the prediction has been made. The idea that the precognitives sometimes disagree on their predictions leads to many questions about Anderton's choice and free will when he is faced with a prediction of him committing murder. Is Anderton's future locked, unable to be changed, or is there room for choice? And what about the possibility for error on the part of the precognitives?

Minority Report also contains many errors. Notice how Anderton's retina ID somehow remains on the Dept. of Precrime's authorized list long after he becomes a fugitive. This allows people to get in several times undetected. In one instance, Evanna (Jessica Capshaw) is allowed to walk into the Department Of Containment with a gun by using Anderton's retina ID, and this is after Anderton's previous unauthorized visit to Precrime. Even if the police had at first forgotten to close this loophole, Anderton's all-too-public appearance inside Precrime's 'temple' would certainly have changed that before Evanna visit. Another problem is when Agatha guides Anderton around a mall using her precognitive skills. With pinpoint precision, she predicts how they can hide behind balloons and give a bum money so as to escape their pursuers. While murder is easy for the precogs to predict, it is explained that the precogs can't predict things like rape because of the lesser nature of the act. We are stuck with the paradox of Agatha not being able to see rape, but being able to predict the positions of balloons and bums on a whim.

In another part, Lamar Burgess (Max von Sydow) kills Anne Lively (Jessica Harper). Knowing the possibility the precogs will see him, Burgess waits until after he meets with Lively to put on his disguise. This makes for a dramatic visual of Burgess's preparing to murder Lively, but it doesn't make any sense. Burgess's whole intent here is to not be recognized. A Precrime technician would have been looking at the live feed and would have recognized Burgess, pinning him with murder. It makes more sense that Burgess would have put on his disguise before he showed up so as to eliminate any possibility for a slip-up.

The story also wanders. Anderton's eye replacement takes too much screen time with no real benefit. We learn that Anderton once arrested his black market eye surgeon, but the surgeon doesn't hold a grudge against Anderton. After the surgery the surgeon disappears from the story, rendering the involved scenes that build up his character into useless fodder. Such asides don't justify the lengthy 2 hr. 25 min. running time.

Action: The way the action was shot revealed important details only after the action happened, if at all. An example of this happens at the end, when Burgess holds Anderton at gunpoint on a balcony. A close-up showing just their heads and some anxious dialog leads up to a dramatic climax. A gunshot rings out and Burgess falls. Only afterwards are we allowed to see that Burgess had somehow inconspicuously reversed the angle of his gun in order to commit suicide. This ends up being a cheap substitute for real creativity. It would have been simpler and more effective to see Burgess decide to give up and turn the gun on himself.

Other things happened too conveniently. Anderton ends up in a car factory and zooms off of the end of the assembly line in a new model (apparently, they come complete with a full tank of gas). Or how about his escape from Precrime that involves the all-too-convenient use of a lever that opens the drain for the tank he is standing in: 'WHOOOSH!'. Conveniently, the drain is big enough for a person to fit through, and Anderton makes his escape. Unfortunately, it works so well, I expected to see a cameo by the Tidy Bowl Man, only to get flushed away with Anderton. Maybe in the future they could just place a big red button labeled 'Escape' on a nearby wall for Anderton to press at the appointed time.

Character Shifts: Characters, having established certain values within themselves, later shifted in order to fit within plot requirements. In establishing his character, Burgess comes off as old, tired, and world-weary. He seems on the brink of retirement, and while he feels outdated and unneeded, he's not fighting it. "What can an old man do..." says Burgess about his inevitable displacement from power. Later, Burgess becomes divisive and control-driven. Burgess is revealed as the mastermind behind setting up Anderton for murder, a plot designed to keep him in a position of power at Anderton's expense. Another character, Witwer, portrays himself as competing for Anderton's position. After Anderton becomes a fugitive, Witwer goes so far as to take over Anderton's office to the objection of Anderton's former coworkers. Later, Witwer spearheads the fight to clear Anderton's name, proclaiming Anderton's innocence. Witwer takes it upon himself to reveal to Anderton's boss (Burgess) how Anderton might be innocent. Unfortunately, we are left to fill in the gap as to why Witwer suddenly changes his view.

Acting: What is it about Tom Cruise that doesn't seem to fit into most any movie he's been in? To the detriment of his characters, a distasteful attitude seems to surround his acting. That said, Anderton is one of Cruise's best performances to date. His performance feels thin at times. During more dramatic moments, Cruise can't find the line between being completely detached and over-dramatic, often shifting around. This doesn't make the movie unwatchable by any means, though it is noticeable. Another distraction is how Cruise's character remains in the spotlight just a little too long for comfort. He's the only one who can use a data glove (Jad, Anderton's coworker, uses the same computer display, but without the benefit of fancy gloves). Somehow, in a divisive move, Cruise's only male competition (Witwer, who is a go-getter and around the same agelooks as Anderton) gets killed about 23 through.

Overdramatic Visuals: Mostly, the effectsvisuals were good to excellent. I liked the personalized, full-motion advertisements that address people by their first name after recognizing their retina ID. However, there are many effectsvisuals that under mild scrutiny don't pass a 'reality check'. When Anderton visits the Department Of Containment to view a prisoner, all of the prisoners are put on display, as opposed to just the one Anderton needs to see. Apparently, computers are smart enough to deal with 3D imaging and retinal ID's, but can't differentiate between prisoners. This is all for the benefit of showing off a great visual, without having a reason to show it to us. In another scene on the highway, Anderton jumps to safety off of a car moving straight down. Last time I checked, jumping off of a vehicle traveling at greater than 30 MPH heading directly downwards and landing on concrete results in death. Anderton shrugs this off by learning a new yoga position.

Conclusion: After viewing a movie with so many flaws, I was surprised to see many reviews giving this movie top marks. This is not a 4 out of 4 stars must-see movie by any stretch. Despite Minority Report's many weaknesses, from Cruise's acting to the overdramatic visual effects, I generally liked this film and would watch it again. I would, however, search for a slightly better option first.

Review by suffer-smart-magnet from the Internet Movie Database.

Jun 16 2017, 23:42
A wholly assured masterstroke from a director who may have just reinvented himself.