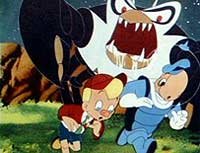 Like others I've read, Pinocchio in Space was as early and positive science fiction experience for me. In 1964 the New York World's Fair was just beginning with all its future exhibits, the space race was heating up and I was watching Astroboy. It was a great time my imagination was ignited. This film helped do that more. I am not going to give away any plot spoilers but note that some scenes are mentioned in the next paragraphs.

The theme of a destroyed but great culture undone by its technology was haunting. Giant creatures jumping out at me was also a new experience. Back then I had not seen Forbidden Planet but watching Pinocchio now I note that the walk through towering Martian technology is strongly reminiscent of the still functioning Krell laboratory depicted in the 1955 classic. Even some of the sound effects are similar.

I also find it fun that the film makers tried also to be educational by adding various space facts while admonishing children to apply themselves to school. In short it was a lot of fun, especially Arnold Stang as "Nurtle the Turtle" an alternative to Jiminy Cricket. (I can not say all the shows I have heard his voice in but others of my generation will know him.) Of course the film also improbably mixes in fantasy and magic, including a whale who can propel himself through space with his spout. But for me it all worked. Probably a bit dated for older kids today but the young and the young in heart will still enjoy this animated morality tale.

Review by tadrearick from the Internet Movie Database.