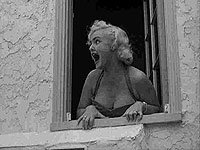 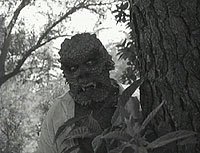 I found this on DVD at a local store and (after some delay at checkout because it wasn't in their system, resulting in me getting it at half the marked price) gave it a spin. The DVD cover and disc do identify the title as "Revenge of the Sun Demon", but the on-screen title is "What's Up, Hideous Sun Demon?" Title confusion aside, it's a pretty enjoyable film. I was rather fearing it would be poorly-done when I read the description on the back of the DVD but had bought it anyways being a massive fan of Mystery Science Theatre 3000 (plus my brother and I used to turn the sound off on bad movies when we were kids and did our own dialog). Also the DVD cover described the film as quite raunchy, with the main character on a quest for sex the entire movie (I guess I'm a prude but I don't like "sexy" movies). While the guy was interested in sex, I don't feel that that dominated the movie, and the raunchiest moment was the very brief appearance of a huge sex toy, as mentioned by another reviewer, in a piece of new footage spliced into the original film.

If you are a fan of B-movies and more importantly, making fun of B-movies, this movie is for you!

Review by Sparky from the Internet Movie Database.