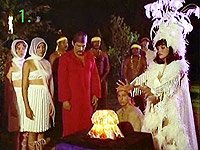 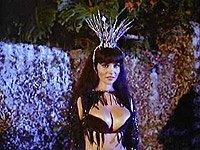 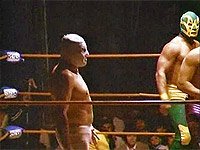 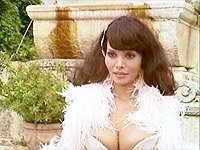 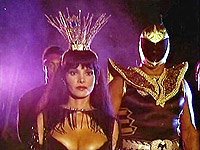 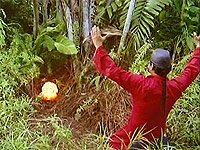 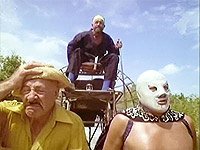 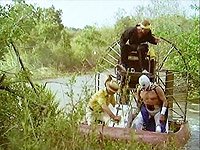 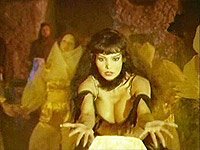 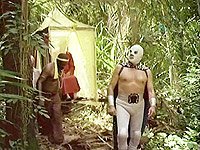 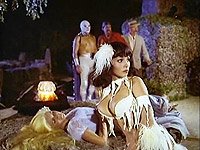 Granted that El Santo was pushing middle-age when he began his film work (sources generally state his birth year was 1917), by 1982 his film wrestling style was beginning to visibly suffer.

While some of the moves he displayed in earlier films were downright amazing to the viewer who was inexperienced in the lucha libre form of wrestling (and a few to those of us who knew of this version of the sport), by 1980, age was beginning to take its toll.

Not all that long after this film was completed, El Santo retired from the ring, realizing that his best days were behind him. He subsequently unmasked on television, and embarked on a brief career as an escape artist before passing away as the result of a heart attack, on 20584.

Considering the impact that Santo had had in his earlier films, fans could have hoped for a better end to his career than his last two features.

FURY OF THE KARATE EXPERTS and its companion piece, FIST OF DEATH, were filmed in 1981-1982, with footage shot in Florida, of all places. Both share characters, primarily a dual performance by the amazingly endowed Grace Renat. Renat plays a good sister and an evil one, competing for a powerful crystal which can give the owner unstoppable power.

Added into the cast of FURY is Tinieblas (Darkness), a stuntman-turned-wrestler who had appeared in a number of previous genre films (esp. MUMMIES OF GUANAJUATO, generally playing monsters due to his strength, agility and superior height. In the ring, Tinieblas was startlingly quick on his feet, and became a popular entertainer.

Originally offered the role of SUPERZAN (a character created for use in feature films and not an actual wrestler), stuntman Manuel Leal opted for the Tinieblas persona and both wrestled professionally in this masked identity and made several films. Most notably, he was one of the members of the Champions of Justice -- a grouping of masked wrestlers who fought evil in a trio of entertaining films. In FURY, he is the evil sister's strongarm assistant.

This was also to be the last appearance of Carlos Suarez in a Santo feature, and it's fitting that he was along for the ride for the Man In The Silver Mask's last outing. Saurez was actually Santo's manager for some years, and frequently appeared in his films through the 1960s and 1970s. He was generally cast as a spy (SANTO CONTRA LA MAGIA NEGRA), a thughenchman (SANTO CONTRA LA MAFIA DEL VICIO) or as a friend or assistant to the wrestler. In FURY, he returns as Cliff, Santo's pal from the previous film.

Set in some eastern country, the film is distressingly slow for a Santo feature. Martial artist Steve Chang and Tinieblas don't stir up much action, and Santo's visibly slow and uncertain in some of the fight sequences. Understandable, as he was 64 years old at the time, given the 1917 birth date. Still, even for die-hard Santo fans, his performance is a distressing swan song.

There is also a monster in both films which is a throwback to the cheesy make-up o some of the earliest Santo features. A bit of ugly makeup and some fun fur applied haphazardly fall a bit short of inspiring terror. After years of sci-fi glitz props and better beasts, this serves as another marked weakness in the final films.

In the end analysis, Grace Renat's form is the key reason to watch these last entries in the Santo series. While it's good to again see Santo carrying on against evil, he's just not up to it this late in the game.