TV Spot - He Is An Unstopable Killing Machine
0:31 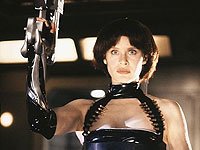 I'm glad James Isaac, the director, decided to return to the B-movie formula after the disappointing "Jason Goes to Hell," which was simply a failed A-movie effort. Now, the acting, storyline and dialogue are definitely in perfect B-movie tradition, but the directing and production design were quite impressive. I loved the color schemes and use of the digital camera, which was then transferred onto film. I loved the digital look of the film, it's almost flawless. And though the special fx were obviously generated by computers, they also looked pretty cool.

OK, so we got ourselves another screwy idea of how to bring Jason back to life, but heck...we love Jason so much that we can't stand to see him go. What makes "Jason X" so much fun to watch is that there's no pretentions. This is pure camp and doesn't try to be any more than pure camp, and it simply takes the genre of camp slasher flick and runs with it as far as it can. This tenth (I'm not quite sure if I can call it the final) chapter contains a lot more humor than the previous sequels. Most of the sequels did contain a certain degree of humor, but this one takes the cake. There are many funny scenes and lines of dialogue, including one where one of the female victims is about to die and her last words are "This sucks on so many levels." Another funny line occurs when the big black guy got stabbed in the ribs by Jason. He says, "It'll take more than a poke in the ribs to kill me." After Jason stabs him again, he says, "That'll do." You can call this movie weird, you can call it insane, but you gotta give it points for originality.

Of course, in great B-movie tradition, all the female characters look like they leaped straight out of the pages of "Playboy" or "Penthouse." Even the scientist, who gets frozen along with Jason, is hot as hell. Though most of these chicks don't get naked, at least they run around in tight, skimpy clothing. As I've said in past reviews, most of the people watching these flicks are guys, so you may as well appeal to the general demographic. I just wish that gloriously hot blonde chick in the beginning didn't get killed off so early and died of such ugly death--her face frozen and smashed into pieces. As far as the nudity factor goes, at least I got my wish at the near end of the film, when those two hot babes stripped off their tops. It kinda sucks that there was only brief nudity, but it's definitely a scene worth fast-forwarding to and rewinding over and over again.

The most entertaining scene in the movie is when the victims are all cornered by Jason and don't know what the hell to do, until the robotic woman pops up like a warrior, in a scant leather outfit, holding a machine gun. You can't help but cheer on the top of your lungs when that scene comes up.

If you're a movie critic, you can pick apart this movie in many ways, but its flaws are what charmed me about the film. The acting is bad, but it was bad to the extent where it made me smile (rather than cringe). The dialogue is also bad, but it made me laugh, and it sort of parodies the cheesy lines we hear in many trashy horror flicks.

Cool death scenes, hot chicks, great moments of humor, one great nude scene. What more can I ask for? I'm not quite sure, but I felt the movie was missing something, which prevented it from making it any more than a slightly above-average film--at least in my opinion. There was a certain aura of dullness to it, though I still had a good deal of fun. Nevertheless, it's definitely worth watching and worth renting on DVD (there's a great commentary and a great documentary about the Jason flicks). You pretty much have nothing to lose. But I really wish they could've played "Let the Bodies Hit the Floor" somewhere in the film, because it sounded awesome in the trailer. Once again, I must say: Stop playing music in trailers if it's not gonna be in the film! .

Review by mattymatt4ever from the Internet Movie Database.

Nov 8 2016, 16:08
With lower expectations (or none at all) the movie could be somewhat enjoyable.
Additional Off-Site Reviews: