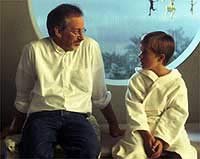 (Artificial Intelligence): a promising title seems a justified statement; But as becomes apparent from the above remark, the film does not meet most expectations.

It should have been a movie by two of the most remarkable directors from the world of cinema. Kubrick wrote the screenplay, but he found to be lacking experience in some respects (special effects). That was the reason for him contacting Steven Spielberg, who with movies like ET and Jurassic Park clearly had shown what he was capable of. Unfortunately Kubrick died while the movie was a mere concept. Spielberg seemed to be the obvious person to finish the job, with the book Super Toys Last All Summer Long, by Brian Aldiss, and Kubricks notes for the screenplay (based on this book) at hand.

The movie starts with an introduction of .: mechas (robots) are the solution mankind found in the near future to the problem of scarce resources. The voiceover who announces these facts annoys from the start but can be justified as the easiest was of telling about the origins of .

Then the viewer gets to know an enthusiastic scientist, who has come up with the idea of creating robots that are able to love. Mechas up to this point were able to function independantly and learn, but were not able to love: their world consisted of mere definitions. The question imposes itself wether emotionless, but self-learning and -'acting robots are actually feasible. Via a time leap we are then introduced to a family who's only son is in a coma. Due to this fact they are selected as a test-case for the first love-capable robot, a boy called David. Though somewhat predictable the mother gets attached to David (though she despises the idea at first) and after a while she even decides to activate the love-routine. This massively interferes with the concept of love, because it makes it seem like love is only a matter of programming. The dramatic point in this part of the movie is when the son awakes from his coma and returns home. The parents are confronted with David, who is suddenly regarded redundant by the father, though the mother still has feeling for the robot. Legitimate points are made regarding the ethical issues concerning . and the responsibility of 'creators' and 'parents'. It is decided to leave David in a gloomy forest, to prevent him from being destructed (since love-activited robots cannot be reprogrammed they have to be destructed once redundant). Kubricks influence is ever so clear: he had a dark view of mankind (consider movies like Eyes Wide Shot, and A Clockwork Orange), and in this phase of the movie he rattles the cage of your conscience. Spielberg is a much more optimistic director: consider movies like ET and Close Encounters of the Third Kind, even Schindler's List. During the movie this difference remains painfully clear.

The theme detachment is further developed in the second part of the movie: a spectacular, though slightly overdone, flesh fair (in which robots are executed as a celebration of real life and out of fear for .) causes a increase in the pass of the movie. Although the idea might very well have originted in Kubricks mind, the cinematographical realisation is clearly Jurassic Park. The story changes to a modern Pinokkio (which also had temporarily been the working title of Kubrick's screenplay), in which David goes on a quest for the Blue Fairy, who will be able to turn him into a real boy. He is convinced that this will make his 'mother' love him again. Again a brilliant idea: a robot pursuing a dream. But the pass of the movie steeply drops, and scenes are annoyingly slow. A nice part for Gigolo Joe and Teddy the Bear (clearly a cuddly family film character introduced by Spielberg) are few of the only things that make the movie worthwile in this part. A glimpse of Kubrick surfaces in the moment where David meets the scientist who created him, during his quest for the Blue Fairy. This scene is situated at 'the end of the world', which ironically is situated in Manhattan (flooded by the smelting of the icecaps), with the skyline-dominating Twin Towers of the former WTC. Some people will undoubtedly appreciate the fact that this hasn't been removed from the film, but I think nevertheless that scenes in which planes crash into buildings and David tries to commit suicide by jumping of skyscrapers, must be painfull for many people involved in the New York tragedy. In a submerged themepark David subsequently finds a Blue Fairy statue, to whom he indefinitely keeps repeating his prair for becoming human. For some reason Spielberg saw it fit to trap Davids vehicle beneath a collapsing Wheel. The necessity for this is completely absent, and I think the scene would only have made a stronger impact if David had decided out of his own free will to stay there. Spielberg seems to be entangled in the (otherwise very well constructed) special effects.

In the Aldiss book and Kubrick screenplay, the story continues after thousands of years. David is discovered by very advanced mechas who -' after they have revived him -' learn about their human ancestors, who are now long extinct. This concept has been completely abolished in the movie. Spielberg makes the mechas look like aliens reminiscent of Close Encounters; he seems to be unable to let go of the friendly-alien-fetish. The film gets trapped in cliches and the epoch it could have been (and of which glimpses can every now and then be seen) is in long epilogue definitely wrecked. Besides that there are all kinds of errors in this third and final part of the movie. For instance, huge amounts of water were frozen, but there has been not apparent change of volume. Most of the buildings would have been wrecked by the expanding water, and the skyline would have changed dramatically. Then there are the mechaaliens who at first speak a language of their own, but later on they speak English (even in the absence of David, which could have given an explanation). Furthermore there are the scientific inaccuracies: David's dream seems to come through when the aliens tell him they can revive a person from the past on the bases of their DNA. This is highly unlikely, since many things like memories, are not stored in the genetic code, but it becomes really improbably when they say they only can do so for a single day because of a twist in spacetime. A needlessly long and forced ending, in perfect Hollywood cliches, in which David gets the chance to spend a final day with his mother; after that he can finally go to sleep, the light are turned of one by one, and the voiceover spawns its last needless remarks. There seems to be only one suitable reactions to this: laugh away the embarrasment of such an ending.

The movie obviously owes a great deal to Spielberg, regarding the specials effects, but lacks the influence of a more cynical director. The impact is much less than an average Kubrick movie. It makes you wonder who could have completed the daunting task (with or without the cooperation of Steven Spielberg). Roman Polanski comes to mind, or perhaps David Lynch or Spike Lee. It would definitely have made the movie more challenging.

Considering everything, Spielberg made a movie which makes you swim in shallow water: good for some fun. But I can't repress the thought that when Kubrick would have completed the movie he would have made you dive, would have shown you disturbing visions, and would have made you surface again gasping for air.

Review by LytseJehannes from the Internet Movie Database.