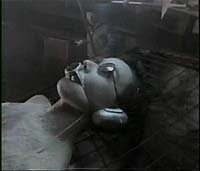 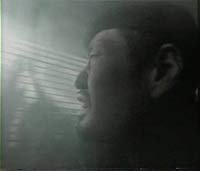 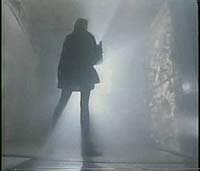 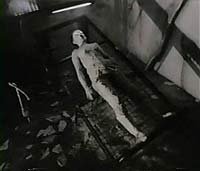 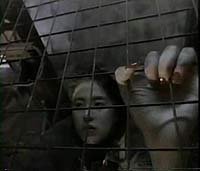 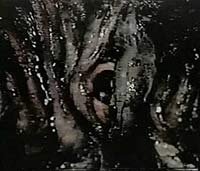 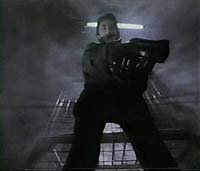 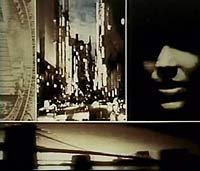 Shigeru Izumiya's underground classic Desu Pawuda aka Death Powder (Japan, 1986) is definitely among the weirdest, most bizarre films I've ever seen. It reminds me of David Lynch' Eraserhead, Shinya Tsukamoto's Tetsuo and some other extremely memorable and unique exercises in cinematic magic and limits beyond imagination. Death Powder has very little to do with plot or story, and what's there is extremely hard to follow and seems not to make any sense. One character says at one point to another: "Try to pretend that you're understanding what it's all about. Like life itself, this makes no sense." That line really tells something what to expect from this low budget gem from Japan, the land of many great film makers.

There are three mercenariessoldiers who go to some mysterious storehouse in which even more mysterious figure is lying on a bed without any mattress. Suddenly, the figure blows some dustpowder on one of the soldiers and then the nightmare begins. It soon turns out, that one of the soldiers (played by the director Izumiya himself) has already been "infected" by this powder and now the question is what will happen to these two hapless victims, the other being a female by the way. The newly "infected" mercenary starts to have severe hallucinations into some netherworld, a universe unknown to us and a place never depicted on film before, and soon it is revealed that the powder has still many more victims to "dust".

At this point I want to say that the plot is extremely hard to follow and I had to watch the film twice in order to be able to write about it. The story and plot are not the things this film has to offer and thus the audience for this kind of film becomes even smaller. The film is also extremely slow moving and has many "dead" moments (the film runs mere 62 minutes, though) so don't watch this when you're tired since this film requires your full attention. These are not necessarily bad things if one can enjoy and appreciate this kind of different and very personal and independent cinema. If you thought Tetsuo was way too irritating and hard to understand in its madness, then forget Death Powder right now because this is perhaps even more bizarre experience.

The message is the same as in Tetsuo: The fear of technology and to what extents it will grow. The camera angles at the beginning where we are in the city among other people are very weird and twisted and they depict the same fears and menaces as Tetsuo does. "Only you can save the world from itself" says one voice during the nightmarish hallucination segments to one character. Besides these themes, Death Powder is one incredible exercise in low budget film making and ultra menacing and mind altering imagery to haunt the viewer days to come, and nights, in my case!

I had very weird dreams (or nightmares, more correctly) after watching Death Powder for the first time last night. I saw dreams I hadn't ever seen, as I hadn't seen a film like this earlier either. This film drills into one's mind and stays there like an acid trip. The imagery at the end is extremely horrible as we "see" what's behind that door.. The effects and make ups are of course cheap, but very greatly created and look as effective as possible for a production like this. Some of the segments are very gruesome and surreal so again this cannot be recommended for any other than a jaded Asianunderground cinema lover. The soundtrack consists of different sounds, whispers, echos, rock, pop and so on, so the atmosphere created by sounds is also very impressive. Still, I don't love this quite as much as I love the definite underground "cyberpunk cinema" classic Tetsuo from the great film maker Shinya Tsukamoto. Death Powder (coloured) has similar elements and same menacing and crazy atmosphere, but lacks the strongest visions of Tsukamoto and is never as striking, explosive and nightmarish as Tetsuo (black and white). Death Powder has also elements from films like Videodrome and other Cronenberg films but they are handled here with the personal touch of Izumiya, not in a rip off way.

Death Powder is highly recommended for all those interested in underground and hyper bizarre cinema experiences and it would be great if this had some official VHSDVD release with English subs at some point. Hopefully some underground distributor pays some attention on this gem in the future.

Review by Bogey Man from the Internet Movie Database.