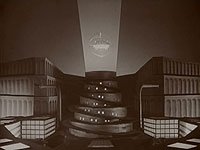 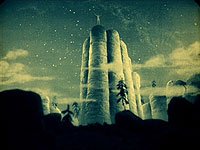 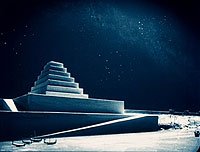 As you well know at this time, mein liebers, this Herr Graf is surrounded by day and night (especially night) by the ample bodies of rich Teutonic heiresses, so when this German count heard that the title of the next film to be shown at the Schloss was "Wunder Der Schöpfung" ( Our Heavenly Bodies ) (1925), he naturally thought that he would be watching an oeuvre about a lot of beautiful and Teutonic young fräuleins for once.

Alas, it wasn't that way... it turned out to be a cultural silent film about astronomy!!... Can you believe that??!.

After recovering from this deception, this Herr Graf enjoyed the lecture of this didactic silent film about astronomy, physics and the whole universe, because although this German count would have rather been looking at physiques of another sort, "Wunder Der Schöpfung" turned out to be a remarkable and entertaining film. It is highly recommended for any audience ( even German counts satyrs ) who will be fascinated since the subject is the mystery of the universe and the world we are living in.

The film was supervised, not exactly directed, by Herr Hanns Walter Kornblum, and it is a "Kulturfilm" as opposed to the commercial films of the German silent era ( well, this Herr Von must say that the "commercial" film of then has nothing in common with the commercial film of today )

In spite of the brainy subject matter, the film is not boring as it explains, in chapters, different lessons about gravity, the planets and the stars. It does so in an entertaining way and even this ignorant German count could follow it so it wouldn't be a problem for any reasonably intelligent audience to understand it. The use of animated scenes, graphics, camera tricks and historical recreations hook the spectator immediately, It was an elaborate project and took two years to make.

In the picture we can see a lot of stars and even guest stars such as Herr Galileo, Herr Copernicus, Herr Newton or Herr Einstein. There's also a short and bizarre futuristic sequence wherein German astronauts travels through time and space, visiting Mars and other planets, explaining what they see and what happens in the universe, until they arrive at infinity, a very faraway place, indeed. At that point the wisely decide to go home.

"Wunder Der Schöpfung" is a very remarkable cultural silent film ( another "Edition Filmmuseum" great restoration with beautiful tinted sequences ) that enlightens and educates the spectator about time and space, the mystery of the universe, the Earth's creation and its future destruction ( a typical German touch this, certainly... ), the planets and the stars; everything done in a detailed scientific way but at the same time very entertaining ( the most fictional part within the film are the Bible quotes and its inaccuracies ). As some longhaired youngster said sometime ago, "Wunder Der Schöpfung" is certainly a wonderful space oddity.

And now, if you'll allow me, I must temporarily take my leave because this German Count must to go into orbit around one of his Teutonic rich and fat heiresses.

Review by FerdinandVonGalitzien from the Internet Movie Database.