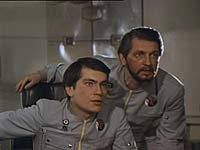 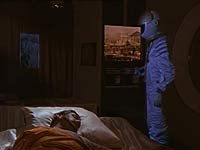 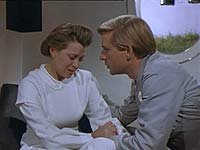 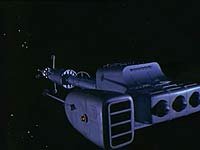 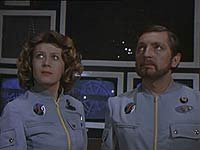 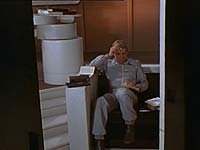 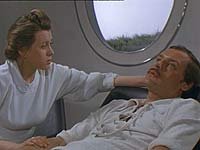 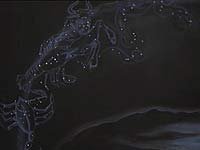 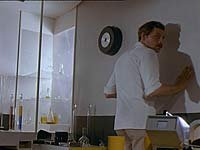 This movie is - at least with the English subtitles available to me - an incomprehensible mess. I have watched a LOT of bad SF movies in my time but this really is a clunker.

The plot, such as I could make out concerned a Russian spaceships journey to the heart of a deadly phenomenon, the titular 'Orion's Loop', which is heading for Earth. The crew are supplemented by an equal number of robots which (for brilliant castbudget reducing and cunning 'plot twist' setting up reasons) have been made identical in every way to them. It is soon revealed, by ethereal aliens, that the dangerous alien phenomenon heading for Earth is actually a benevolent alien phenomenon manufactured by themselves. The aliens used to live in the solar system - but don't any more because their planet ('the tenth planet') got destroyed (for unfathomable reasons) and they now live somewhere else. Seeing Earth in the path of a 'Space Typhoon' carrying a a deadly 'Glass Virus', they send out their sooper dooper radiation belt to save their former neighbours. For some reason these ethereal aliens have managed to kill several spaceships full of people by talking at them too fast before our gallant Russians manage to get them to stop gabbling and explain things in simple sentences.

One of the Russians doesn't trust them and does that, 'going mad, putting the whole mission in jeopardy' thing that worked so well in Ikarie XB1 - and didn't here - before getting a hug from the female robot and just vanishing from the movie because... I dunno... the actor had to go make the tea? Your guess is a good as mine.

From time to time we have some shots of the cast on holiday on the coast. I would guess shot at some local Black Sea resort as this film was made by the Odessa Film studios. What this footage has to do with what is going on in space is not clear.

There's lots of zooming panning and hand held camera in this film. The previous reviewer likens this to avant garde 60's experimental film making. I think he's being very generous. It looked to me like Jess Franco had attempted to shoot Solaris in two days, on the set on Mystery Science Theatre 3000. (Not helped by the fact that our heroic captain does a Mannix over our inept cameraman - his leg appears in the frame at one point - as he lies on his back then films the actor running away on the ceiling.).