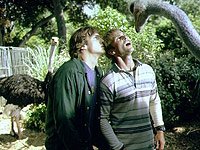 Dude, Where's my Car is a cinematic achievement that will no doubt steer the motion picture industry of this decade (and perhaps the entire century) toward a new height. Dude, Where's My Car came out in 2000 heralding a new golden age in cinema. I can hardly believe that it has taken three and a half years to finally make it to my DVD collection. It stands proudly next to the Godfather, Shawshank Redemption, and the like. I am glad that I am now able to review this movie and give it the attention that it truly deserves.

This movie works on so many levels and I hope that I am able to touch on a few of the themes. The movie starts off with Jesse and Chester waking up from a killer party the night before. Jesse is portrayed by Ashton Kutcher of `That 70's Show' fame and with this movie proves his versatility as an actor. It may surprise some of you that he was not given an Oscar nod for his portrayal of the hapless but lovable Jesse. Seann William Scott, the lovable but rude jock from the American Pie trilogy, is able to shine as the cable TV saturated, stoned Chester. While at first glance he seems to represent the wasted MTV generation stuck behind the boob tube without any ambition for furthering his own goals or being productive in society, we eventually learn that there is more to this man-child that meets the eye. Chester has a large role in finding Jesse's car and (spoiler) saving the universe.

The Twins call Jesse and Chester's place to remind them of their anniversary and to inform them that they trashed their place. So Jesse and Chester go to find the car to get to the twin's house and give them their anniversary gifts. Unfortunately, Jesse's car is missing and the story is set into motion. They realize that they have no memories of the night before. Their epic quest begins by seeking a great sage, Nelson that might be able find their lost memories. Nelson is truly a Zen master but is unable to jog either Jesse or Chester's memory. Instead, they go to a Chinese restaurant where they find their first obstacle, a psychic duel between Jesse and the lady behind the take-out counter. Dude, Where's My Car boldly takes head on the taboo subject of racial and society differences. No racial stereotype is off limits in this film. Jesse's banter with the over the counter lady is reminiscent of the dialogue between Billy Crystal and Meg Ryan in When Harry Met Sally. But instead of touching upon the theme of male-female relations, we learn how difficult it can be to get an order of Chinese take out. This banter turns out to be too much for our hero Jesse and he is left with only one recourse, physical violence. So Jesse and Chester are left without take out and without their sage, Nelson. All hope seems lost when a clue to their previous night approaches. It is Christie Boner. She gives them more clues of their missing time. Unfortunately, for the two protagonists, it is not long before her jock boyfriend, Tommy arrives. The character Tommy may at first seem like an over the top stereotype, but by the end of the film we see his different subtle shades (`stoner bashing time' vs. `nerd bashing time') and different emotions.

Like Alice in Wonderland, the more they look for the car, the further down the rabbit hole they go and further away their goal seems. They find that they have been to a strip bar in league with a trans-gender stripper, outwitted aliens posing as Hot Chicks, ambiguously gay Nordic aliens, culties, law enforcement officers, and a tailor. Each step of the way they are given a small hint of the night before and one step closer to the car. It seems that the mystery of the location of their car is wrapped in intergalactic intrigue. Not only is Jesse's car missing, but so is the Continuum Transfunctioner, whose power is only matched by it's mystery.

After a series of adventures, they find Jesse' car is sold to some unsavory character and the film comes to one of it's high points. They end up at an osterage farm. This scene is very reminiscent of the raptor escape scene from one (or any) of the Jurassic Park films, except a little better. The true danger is not the large birds, but the farmer himself played by Star Trek's Data, Brent Spiner as Pierre. Another great cameo is Andy Dick as Marc, the poacher. When Jesse and Chester's fate looks most grim, it is Chester's battle of wits, and extensive television watching, that saves the day. I am glad that the makers of this film took the angle that watching countless hours of television is not automatically bad and could come in handy if ever caught by a French mad-man. Unfortunately for Jesse and Chester, the two are no closer to their prize, but this scene sets up the climax of the movie.

The final act takes place at a miniature golf park. They call all the interested parties; Tommy and the Jocks who have the sage Nelson captured, the culties lead by Zartan who have captured the twins, the Nordic aliens claiming to be the Guardians of the Continuum Transfunctioner, their boss Mr. Pizzacoli, and of course, Hot Chicks. Again, I don't want to spoil it for those who have not seen it, but the film works out in a brilliant way. We see the true friendship between Jesse and Chester. It reminds me of the developed relationship of Samwise and Frodo. What is more amazing is that while the Lord of the Rings movies totaled over 9 hours, we get the same level of companionship in a brisk 90 minutes. We also see that love will prevail, nay, must prevail. If I have one complaint about the movie is that the Guardians of the Continuum Transfunctioner too easily succumb to the Giant Alien Babe. I feel that the Guardians would be a formidable opponent not only by their name, keen euro-fashion sense, but also by their very fit build. I can only hope that there was an extended battle scene that did not make it to the final theatrical release. It is my wish that the director will have an Extended Edition like Peter Jackson and his Lord of the Ring Trilogy, but I find this extremely unlikely.

You will most certainly catch me at the midnight showing of Seriously Dude, Where's My Car, the next installment to Dude, Where's My Car story. I have some inside scoop that this is a major green light! I heard that the original concept of the Dude saga was to be a trilogy. I am happy to hear that the studio has already started making the second chapter and I am hoping that it will be profitable enough to make Really, Seriously, Dude, Where's My Car!?! so that we, the public, will be able to see the Dude story arc in it's entirety.

For rich dialogue, multiple themes, brave innovative movie making, and disregarding political correctness, I highly recommend this film. This film stands up to multiple viewings and gets better every time it's watched.

Review by Crakin from the Internet Movie Database.