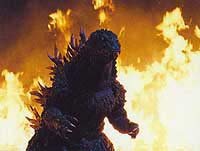 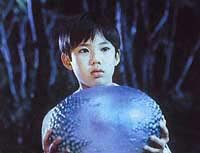 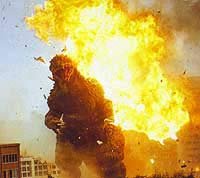 If any of you out there know me at all, you know that I simply love Godzilla and all of his rubber-suited brethren. That said, I am fully capable of giving a fair and impartial review of Big G's films; let's face it, the big guy's had his share of stinkers (GODZILLA ON MONSTER ISLAND anyone? Peeee-yew!!!). Some of the Godzilla oeuvre (fancy film-snob word!) have been attempts at social commentary, with varying degrees of effectiveness, yet most are simply good, old-fashioned city-stompin' fun. I am pleased to inform you that the latest installment in the series is a fine return to the old-school fun monsterfests of yore, in fact GODZILLA VS. MEGAGUIRUS gets the El Buncho seal of approval as the best Godzilla flick in a decade!!!

SPOILER WARNING!!! As of now, since I basically just gave you all the "yea or nay" of all of this, you can skip this review if you don't care about Big G. All others, stick around! Also, since this film has yet to see US release, and most of you may not have my video resources, where else are you going to hear about this one?

In this installment, despite what Toho has set up in the previous entries of the current series, it is revealed that Godzilla (there is no longer a distinction between old and new) has shown up a couple of times since 1954 (when he was decisively killed by an "oxygen destroyer", but I won't go there) in search of nuclear energy to feed off of. To curb the big critter's appetite (to say nothing of his periodic rampages all over the country), the Japanese government bans nuclear power and develops a plasma-based clean fuel system. For whatever reason, this does absolutely nothing to thwart Godzilla.

The government then implements a paramilitary group called the G-Graspers (Yes, I'm serious) who intend to put an end to the big guy once and for all using a focusable black hole generator called the Dimension Tide. The leader of the G-Graspers is a young woman named Tsujimori, a former ranger whose commanding officer was killed in an encounter with Godzilla five years previous, and she is obsessed with avenging her commander's death. She recruits a humble nano-technology (itty-bitty robots) genius named Kudo to help on the Dimension Tide project by using his skills to create the ultimate computer system to guide it. Why he creates a super-guidance system that can only be operated from his personal laptop computer is beyond me, but I'll let that one go

The test of the Dimension Tide gun is a success, sucking an abandoned test building into oblivion, but there is evidence of residual dimensional distortion. Of course, no one thinks anything of it, and a little boy who accidentally witnesses the test finds a mysterious egg, which he promptly takes home. His family is then transferred to Tokyo, where he abandons the growing, oozing egg in the city sewer system. At the same time, a solar powered satellite is launched into orbit which houses the Dimension Tide gun and can be focused anywhere in the world. However, it has been untested from such a great distance Meanwhile, the egg has begun to replicate in the stagnant sewer water, and soon there are thousands of the damned things

In the meantime, Tsujimori and the G-Graspers find Godzilla on his way to the mainland, and Tsujimori plants a tracer on Godzilla (while hitching a ride on him, no less!!!), making it easier for the G-Graspers to track him with the orbiting black hole gun.

A young couple walk into a back alley and are devoured (very graphically for one of these movies!) by what appears to be a giant dragonfly larva. Then, for absolutely no reason, Tokyo is flooded (???), creating a perfect environment for these giant dragonflies to mature in. Presently, there is a swarm of them flying about in search of radioactive sustenance (I know they ate people, but what the hey?), and by swarm I mean thousands. And what better radioactive snack than a 400-foot tall guy in a rubber suit?

Megaguirus proceeds to hand Godzilla the granddaddy of all ass-kickings in a scene which is truly painful to watch. This is without question the fight of Godzilla's career, with a climax that made me feel like I haven't felt since that day back in 1977 when I first saw Luke Skywalker blow the Death Star out of the sky. For once Godzilla really earns his victory. Trust me, Godzilla fans, this is the stuff.

Once Megaguirus is dry-roasted, Godzilla falls victim to the Dimension Tide's black hole. Or does he? (Watch all the way through the credits for the answer to that question.)

As is apparent from my synopsis, this movie doesn't make a whole lot of sense, even by the somewhat dubious standards of the Godzilla series. To that I say, "who cares?" This is one of the few times where I'm utterly willing to overlook such things, because this is the rare Godzilla flick where the story with the humans is actually interesting and lively. If you like this kind of stuff, definitely check it out! FINAL EL BUNCHO GRADE: A SOLID 9 OUT OF A POSSIBLE 10.

Review by EL BUNCHO from the Internet Movie Database.