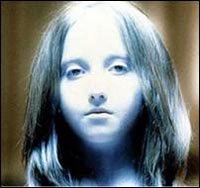 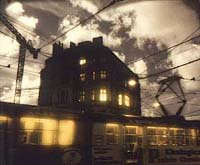 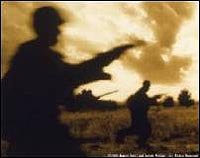 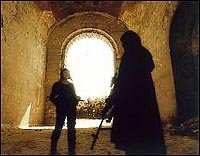 Avalon can be seen as part of a trilogy, the first installment of which would be Ghost in the Shell, the last, Ghost in the Shell: Innocence. Avalon contains many direct references to Ghost in the Shell, and shares a lot of its motif of philosophical search for the self. They also share the cyberpunk imagery, and the fact that the main heroine is an impassive female warrior. I mention all this because I think it's inadvisable to watch Avalon if you haven't watched Ghost in the Shell (and pondered on it a bit). Avalon can be extremely heavy at times. This movie does not make you think; watching Avalon is like trying to decipher a zen poem, which I think can be done, but not through intellectual decoding.

In Avalon, a lone hunter in a virtual reality game shares her life with a basset dog, and all her activities seem to be centered around getting better in the illegal, dangerous game and getting food the dog with the money she earns there. The game is illegal because you can die playing it; "really" die in the concrete, bleak urban world that Ash, the main hero, lives every day. However, apart from the possibility of virtual death, the game offers a secret - the highest level, Avalon. The legendary Avalon is the "Isle of the Blessed", where King Arthur lies in eternal sleep. In the movie, it is a mystery, which haunts Ash ever since the deaths of her last player team.

The search for Avalon is depicted in the most beautiful cinematography. The plot is very symbolic and should be considered so; the search for the gate to Avalon can mean many things, and the nature of the quest changes as Ash is getting closer. However, like Ghost in the Shell: Innocence, the movie is heavy and long, and the characters engage in philosophical discussion every time they can. With all its beautiful cinematography, interesting acting (very automaton-like, but intentionally so), and a set of intriguing philosophical questions, this movie suffers from heavy-handed imagery and symbols, sometimes. Hard science fiction pushes the science as far as possible; Avalon is an example of hard cyberpunk, where the confines of the conceptual world dreamed up by the director are explored fully and unremittingly.

If you are ready to take a film not as only entertainment, but also a challenge to your thinking power, Avalon, like all Oshii's movies, is a thrill. However, beautiful, intellectually rewarding science fiction does not have to be longish and heavy, as Avalon is at times. Watch Ghost in the Shell before it, watch Ghost in the Shell: Innocence after it, and approach this movie at your most relaxed, for it to be a rewarding rewarding experience; it can wear you down, otherwise.

One more thing: if you're Polish, watch the Japanese dub with English subtitles. The Polish lines were translated literally from the Japanese, and they are very often almost gibberish (and the Japanese voice-acting is better, too). Also, do not let the fact that the movie's virtual world seems to be set in your local K-mart detract from your watching experience.

Review by symbolt from the Internet Movie Database.