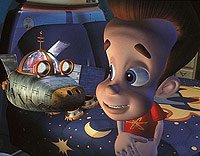 Jimmy Neutron: Boy Genius was one of the biggest gambles Nickelodeon ever took and it paid off immensely. Making a film entirely off of the quick-witted shorts that the network aired in between programs frequently and off of one brief TV pilot isn't something every company jumps at the opportunity to do, but Nickelodeon bravely took a risk and it paid off by launching one of the network's most beloved cartoons.

Personally, I was never a big fan of The Adventures of Jimmy Neutron, which ran on Nickelodeon from 2002 to 2006 and spawned a spin-off in 2010 based on one of its side characters. I was big (and still am) on programs and movies that had relatable characters, and I couldn't much relate to an unsung genius who concocted little mechanical machines in his bedroom to use to benefit every day life. The show's main theme was the theme of being under-appreciated for a talent one boldly possesses and how one can go under the radar when they're potentially making a big difference.

Yet at seventy-seven minutes, the official introduction we get of Jimmy Neutron, an incredibly advanced ten year old kid who "has a knack for inventions, a super-powered mind, and a mechanical canine," isn't half bad and zips along with its free-spirited, relatively easy-on-the-eyes animation and cute, charming little premises that teaches the youth of today the importance of parental influence and societal order. Just don't tell your kids that going into it. Jimmy Neutron (voiced by Debi Derryberry) has been trying to make contact with alien lifeforms for weeks now, yet to no avail. He winds up sending them something of a care package with a video showing his parents, himself, his dog, and his life on earth.

There is a new theme park opening in town and Jimmy and his friends Carl Wheezer (Rob Paulsen), a chubby asthmatic and Sheen (Jeffrey Garcia) are denied permission to attend the grand opening because of it being on a school night. They decide to rebel against parental authority and sneak out anyway, returning just in time before being caught by their parents. They wake up the next day to find all the adults removed from planet earth, leaving nothing but a generic note saying that they have gone to Florida. The kids are initially thrilled, free of the shackles of discipline, and commit acts they assume to be inconsequential such as having a contest to see who can eat the most cotton candy and who can wreak as much havoc.

It soon backfires, with an influx of owies, boo-boos, tummy aches, and constipation (another reason I was off-put by this film when I was young was the thought of losing my mom and dad, who I preciously clung to like a magnet on a refrigerator; the scenes of the kids hurt in some way, crying for their parents deeply upset my wimp-self). Jimmy investigates and learn that giant, spherical aliens housing mysterious green liquids have kidnapped their parents and plan to make a surprise launch to space, using amusement park equipment as their rocketry.

This is silly, innocuous fare that isn't as substantial as a Pixar endeavor, but light-years more effective in terms of escapism and imagination than anything currently on the primetime Nickelodeon lineup. The animation here replicates a more unpolished feel that improved on the typical hand-drawn animation pioneered by The Walt Disney Company, yet not refurbished to look like something along the lines of Monster's Inc. or Shrek (the animated competition during the original release of Jimmy Neutron: Boy Genius). The story depth is slim and slender too, which will definitely not be a burden to kids or adults, who should take time to appreciate and recognize the highly imaginative material at hand here. Reiterating that my liking for the show, even growing up, was small and concise, and my memory of the film's plot sour and not wholly positive, this was a pleasing and successful romp, emphasizing on what kid's need to do more of; dream.

Review by Steve Pulaski from the Internet Movie Database.