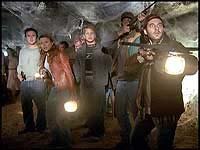 Two months ago, while I was wasting away the afternoon in front of the television, I saw a preview for ELF on some random channel. I think I was hooked on this movie from that moment on. The stuff I saw on that trailer was exactly what people like me hope for in a movie. First, I saw the GIANT MUTANT SPIDERS. That's something that everyone enjoys in a movie. Then there was the title, Eight Legged Freaks. It's not serious and its not dumb. It's the best title for this kind of movie. They could have called it GIANT MUTANT SPIDERS, but that gives too much away. And I also saw David Arquette in the trailer screaming "Get away you eight legged freaks!" and that was awesome. Arquette's been in most of the SCREAM movies, and he's always been a good actor in the horror category. I expected he'd be just as great in ELF.

So from that short trailer I was sure that this movie was going to be awesome. I'm sure many people didn't share my immediate enthusiasm toward ELF, since there weren't a lot of clips and it was probably not as good as other summer blockbusters. Anyway, summer went on and I saw a few other random movies. They'll be reviewed somewhere else. Finally more commercials began to show up between my favorite shows and they only further melted the film into my brain. Soon the only movie I could think about was ELF and not even the trailers for SIGNS could distract me. I knew that if I didn't see this movie I would go insane.

Turns out the weekend ELF was released was the weekend that I was allowed to invite a friend to come over. I met Paul over at Golfland and then he, his friend Ted (?) and I went to Century Theaters. This theater was empty of life except for a few young kids in the arcade and some employees at the concession stand. I'd be avoiding the stand because a small candy can cost up to $2.75 and that is about $2.50 too much. A small soda is the same price as renting a movie. If I wanted to buy expensive food I'd go to a fancy restaurant. So I spend my remaining four dollars in the arcade with San Francisco Rush. We had to wait for about forty minutes for the movie because we got there so early. I just wanted to get inside and watch the movie already. Soon enough it was time to go into the theater.

The previews were pretty good. DREAMCATCHER looks like it'll be good, mostly because it's from a Stephen King book. Anyway, the movie starts and the credits begin to roll. All the while I am expecting nothing out of this movie beside a good time. All horror movies start out the same way. All the classics, at least. In TREMORS, no one knows about the giant worms, the roads are conveniently closed because of construction, and the phone lines are down. In ELF, no one knows about the spiders (except the smart kid, but that's okay because no one listens to the kid anyway), the roads are blocked and the phones are down. But, unlike TREMORS, these three things happen over time- and not right away. The phone lines, for example, go down after the spider's chase down the motorcycles. That's not for about twenty, maybe thirty minutes into the movie.

And then there's always that one completely random place or thing that causes all the trouble. And it wasn't the truck driving through town with the toxic waste that was random, because the barrels of waste were going to the mines (that was briefly explained later in the movie). It was the Exotic Spider Farm that caused all this trouble, and why the hell is there a spider farm in the middle of nowhere, anyway? So a barrel of toxic waste falls out of the truck and lands in a pond. The crickets around the pond are used as food for the spiders in the farm, so soon these toxic waste carrying crickets are being fed to the spiders and this is where trouble begins.

But before you get to see the GIANT MUTANT SPIDERS, you have to meet the characters that will later save the day. There's David Arquette's character Chris, who left town ten years ago and is just now returning. His dad owned the mines around town. It's not totally clear why Chris leaves town. But his dad went crazy and died while Chris was gone and it was because of the methane gas that the mines were full of. Inhaling too much of that stuff will make anything look like a gorgeous woman, even a bottomless pit of death.

Then there's the hottest police officer ever filmed. Kari Wuhrer plays Sheriff Sam Parker, a single mother of two. She runs the town with help of her partner, Deputy Pete (played by Rick Overton, who was hilarious). Her children, Mike and Ashley, are also important characters. Mike is a regular visitor at the spider farm and knows a lot about the creatures. He even has a program on his computer to show how large a spider can grow based on spider body parts. Ashley is a rebel in the making with a motorcycle-riding boyfriend. Scarlett Johansson plays Ashley, and she is pretty damn hot.

And there's Doug E. Doug's character Harlan. He's a paranoid guy who talks about conspiracies and such things over his radio station. Everyone in town listens to it. He has some good lines here and there, but it wasn't really about the comedy in the movie anyway. There's a bunch of other people to meet as well. Wade, the mayor, is a money-spending jerk that no one really likes. He owns a couple ostriches. There's Chris' aunt Gladys who gives Chris a place to stay.

So by the time you've met everyone, the GIANT MUTANT SPIDERS have already grown gigantic. They slowly make their way into town through the mines. First they eat pets and small animals like that, but soon they begin feasting on people. No one knows what to make of it. The movie goes at a steady pace and gradually speeds up as more spiders show up. It's just like every horror movie before it, which makes it perfect. And after about an hour, all hell breaks loose when all of the GIANT MUTANT SPIDERS are crawling through town jumping on people or snatching them into their holes. The smart kid has told us that these spiders in town are all males, and that they're just taking the people back to the female- who must eat.

The female is 3 times the size of the males, so now that they've become GIANT MUTANT SPIDERS, you can expect a really freakin' huge beast. Now they must destroy the female to save the town, but also find a way to dispose of the males at the same time. How will they do this? Well, I'll tell you that it has something to do with the mines.

Overall it was a really awesome movie. People expected a comedy and they were disappointed. But the actors and film crew tried to tell people that the movie was not a comedy. It was a horror movie. I knew that, and so I was pleased. The pace was perfect and the death toll was high and great. The special effects were very well done through most of the movie except for a few short spider attack scenes. The guys from INDEPENDENCE DAY worked on this movie, and they're the ones who brought us the awesome scenes where the wall of fire moves through New York. Good stuff.

I definitely recommend this movie to anyone who likes old-fashioned horror movies or that just likes GIANT MUTANT SPIDERS in general. I liked this movie a lot. I give it a solid 9 out of 10. I lowered the score one point because of the few scenes where the spiders looked way too fake. I mean, how hard is it to make better lighting or use more shadows to make the scene look realistic? I'm talking about the scenes when someone's on the ground kicking and screaming because there's a spider on them, but I really couldn't believe those scenes because the spider looked like it wasn't really on top of the person.

Review by Chris from the Internet Movie Database.

May 29 2017, 20:02
If you really have nothing else to watch, this might just be a justified rental.
Additional Off-Site Reviews: