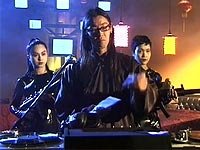 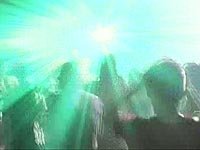 This movie is a major mess as far as a sci-fi movie goes. I generally love a great majority of sci-fi movies. The only sci-fi movie I remember being this bad was "Future War" which ranks near the top of IMDB's worst films list. Not only is Narcosys incredibly lame and slow-paced, it's downright boring to the point of suicide. The characters are ALL annoying as they can possibly be. The acting is beyond terrible throughout the movie, even as far as indie features are concerned. The CGI effects are entirely laughable recalling late 1980's technology on an Amiga system. The camera work seems as though a pre-schooler was given free reign of the camera. The editing is so haphazard it's not even funny.

The plot never makes much sense or really goes anywhere. There's scenes that can't possible have any redeeming value to any sort of script. A party scene near the end of the film goes on for quite a few minutes just showing rave dancing, no breaks to other scenes at all. Ever hear of deleted scenes or AT LEAST shortening scenes down for time? I think the makers of this movie were all stoned on some tainted weed.

I guess this tried to be a really poor man's version of "The Matrix". Don't get me wrong...I like quite a few Aussie films, but this is so bad I wouldn't even recommend it to my worst enemy.

Here's how the promotional materials explain the movie: "Featuring incredible visual effects and dazzling action sequences, Mark Bakaitis' groundbreaking sci-fi thriller is a must-see for fans of the genre."

Groundbreaking? What was groundbreaking about this pile of junk? Incredible visual effects? Perhaps to a blind person. Dazzling action sequences? Gee, if you don't fall asleep from boredom first! I'm sorry I had to view the movie in it's entirety, but I always give even the worst of films the chance to redeem themselves to the very end. Unfortunately, Narcosys is so utterly terrible that it doesn't even deserve that chance.

Review by WestPassion75 from the Internet Movie Database.