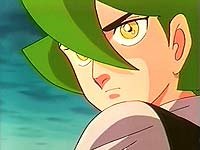 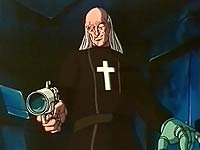 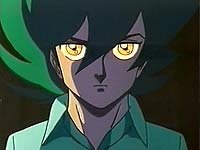 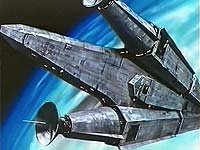 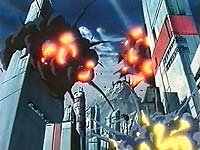 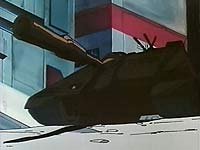 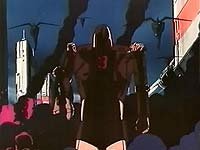 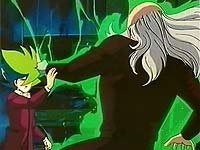 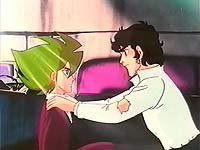 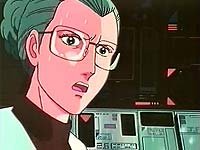 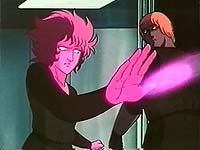 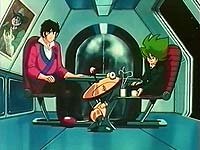 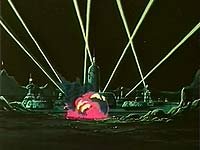 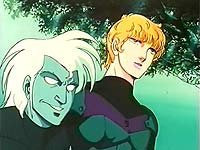 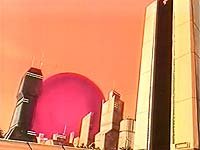 LOCKE THE SUPERMAN (released in the U.S. as LOCKE THE SUPERPOWER) was one of a number of highly touted space-themed sci-fi animated features made in Japan in the early 1980s, a group that included SPACE ADVENTURE COBRA, ARCADIA OF MY YOUTH, CRUSHER JOE and the GUNDAM and YAMATO movies. LOCKE has a very unusual look and feel and tells a solemn, if action-packed story. Its character design and character movement deliberately hark back to a 1970s style, perhaps reflecting the look of the manga on which it's based. Locke himself, for instance, has the characteristic pointy chin and oversized eyes, topped by huge unwavering tufts of green hair, plus an equally unwavering deadpan expression.

Anime fans who can get past the odd character design will be rewarded with a thoroughly unpredictable tale involving a super psychic in the far future who sides with the Earth Federation against a hostile galactic organization of super psychics in training. The story takes its hero to all sorts of planets and orbiting space stations for a series of confrontations with a crew of killer psychics recruited by the elusive Lady Cahn and her chief lieutenant, Cornelia Prim, who develops an attraction to Locke in the course of their sparring. It all culminates in a suspenseful climax aboard a massive sphere housing Lady Cahn's inner circle that faces an outer danger that can only be averted if the combatants join their powers and work together.

Locke is a most intriguing anime superhero who is over 100 years old, so we're told, yet maintains the image of a teenaged boy. He is adorned in a series of attractive costumes that can best be described as futuristic medieval. He is a super-powered psychic able to teleport himself, create force fields, read minds and project thoughts. He is powerful enough to defeat any opponent until he encounters Lady Cahn's prize pupil Jessica, who is tormented by a repeated flashback of Locke shooting and killing her parents, all a result of psychic manipulation by Lady Cahn. Jessica is sent to infiltrate the good guys by having her enter a Federation hospital as an amnesiac so she can get close to the Federation's chief operative, and Locke's contact, Ryu Yamake. The plan goes awry when Jessica and Ryu fall in love, creating a sweet romantic subplot in contrast with the otherwise frenetic goings-on.

LOCKE THE SUPERPOWER, the English dubbed version available in the U.S., had its title changed from LOCKE THE SUPERMAN for obvious reasons--no one wants a lawsuit from the Man of Steel!--although all the dialogue still refers to the character as "Locke the Superman." It is considerably shorter (by 29 minutes) than the 120-minute Japanese release version. A comparison with the Japanese-language tape reveals many additional dialogue scenes that might have cleared up some of the confusion arising from the overplotted screenplay. Also, numerous bits of violence, gore and nudity are edited out of the English dub to make the film more family-friendly (it was marketed by Celebrity Home Entertainment as a children's video!). The color is somewhat muted in the U.S. tape. Another major problem is the extremely poor quality of the English dub, with the voice actors reading their lines as if for the first time. Furthermore, the soft, sparing, romantic quality of the original music has been drowned out by an intrusive, tacked-on electronic score. If any anime feature cries out for re-release in its complete form in its original language, it's this one. Watching the Japanese version (albeit without subtitles) was like seeing it for the first time.

Review by Brian Camp from the Internet Movie Database.