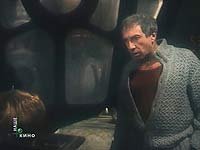 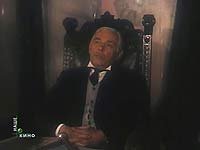 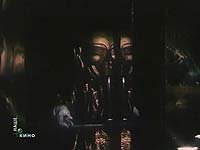 I hadn't quite realized when I watched this how much of the original Isaac Asimov novel of The End of Eternity I'd forgotten since I read it as a child. I enjoyed it then, but I wasn't sure how it would hold up for an adult audience. This Soviet adaptation proves that if nothing else it at least films very well indeed. It actually made me wonder why this is the only filmed version as The End of Eternity seems perfectly suited for the screen, with an excellent and original science fiction idea behind the plot, and integral romance, and a theme of rebellion from the main character.

All three of these things are brought across very well, and the other reviewer on this site is right when he uses the word "moody" to describe it. The central setting of "Eternity" is excellently realized -- at the same time as it is futuristic, huge, and imposingly impressive, it is also dank, unsettling, and off-putting. Which is just the right vibe for this place to give off, having as it does exciting power which it is frightening and suffocating in the use of. Even the use of old-fashioned business suits in the futuristic set gives just the right slightly-off feeling.

The character of Harlan is build well through actions rather than words, which is right as he is established not to be an effusive person -- and this makes it the more effective when he rebels. And his falling for Noys is believable despite its quickness for the fact he has been established as having been so reserved an inexperienced.

The the resolution of the theme of Harlan's opposition to corrupt authority -- in which he runs off and decides on uncompromising individuality, is a surprising and powerful one.

Good writing and acting are easy to find here, but it's really most worthwhile as an occasionally out-there but always effective science- fiction mood piece. The musical underscoring is a big part of that, as well as darkened but futuristic sets, unusual camera angles, and more.