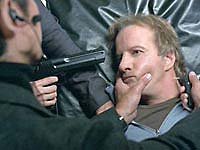 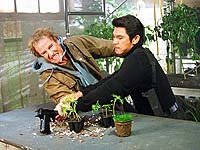 I'd not blame the budget on this one, as most the props and sets actually looked as if they had some money and thought put into them. The movie starts off pretty painful (except for the special VR special effects), but does pick up some later. The worse part of this flick was the fight scenes, and if they had been done well this would have been a much better film to set through.

As others have stated, while there are certainly environmental problems out there, most are hyped and exploited as means of offering more control and financial gain, by the people funding those doing the hype and exploitation, while the people that are doing the financing are doing major, perhaps irreversible, environmental damage that gets hardly any play at all as a concern, the plot of this movie is the way that those at the top of the food chain of this world like to conduct their affairs, which indeed makes this movie worth watching and giving a bit of thought as to its relation to how we see the world being run today. That today and in the movie, those in control can create economy out of electrons, and have all the wealth they could ever need, it must be some other reason they do what they do, and that is the power to kill off and then keep enslaved much of the worlds population. That said, the movie could actually be a very strong possibility of our future, as current trends make future events.

Eugenics, genocide and slavery is more the rule then ever, it has just become more subtle. If I had even the slightest inclination somebody wanted to do me in, I'd goggle eugenics and Endgame.

Review by goat-23 from the Internet Movie Database.