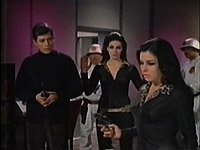 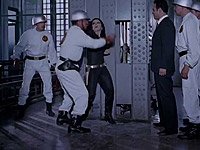 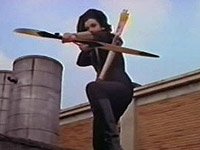 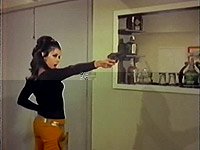 Once again the 3 cute agents in black suits have to destroy the plains of another madman who wants to rule the world,again the housekeeper(Ochoa) try to make the funny part but once again she failed in this,also other characters of the first movie appears,like the detestable Fernando Casanova or Erick Del Castillo in the roles of boyfriends of 2 of the girls but one results be a double agent and work with the bad guys,again scenes of fights,bikinis,high society style scenes,dance numbers by Emily Cranz the movie is practically the same about the first part,but again was a smash hit in box office and it's curious why don't made another one.Because the whole thing can be use again and again like happens with Santo this camp movie as happen with the first you still enjoy it.The only new thing about the first is the girls have like batman weapons,a helicopter,a ship and like this is a low budget film and don't have money for something like the batmovile use 3 black mustangs convertibles with phone and some simple weapons.

Review by Memorabiliaurb from the Internet Movie Database.