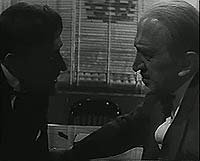 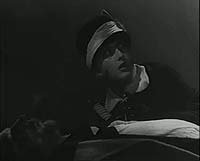 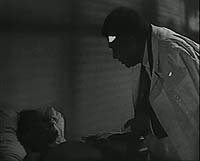 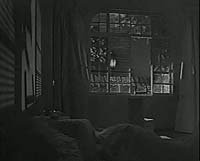 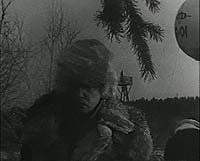 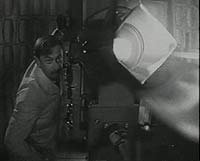 I didn't exactly know what a hyperboloid was before I watched this movie, and afterwards I admit I still don't. It seems to be a very deadly heat ray of some kind, but we don't spend a lot of time dwelling on seeing it in action, and that help illustrate the focus of this film.

There's a a science fiction premise -- a basic one that deals with the invention of a new super-weapon. But after an effective initial scene of a suspicious abandoned house being investigated, we are thrust headlong into a film more about the international intrigues to discover, control, and exploit the new weapon than about the weapon itself. And that's by and large a wise move; the intrigues are tense and the film is atmospheric. The 1920s time period and largely French setting definitely contributes to an often, smoky, secretive atmosphere.

There's a moral here about the peril of allowing moneymaking interests to control a dangerous weapon. That's well in tune with Soviet governmental ideology, but in this case it's a point well made and as no dead horses are beaten, it's not unwelcome moralizing.

The main flaw is that we jump so quickly into the plot and the hunt for the invention, that we don't get much of a chance to see the characters involved in it built up or developed. That makes things dryer than they need to be and reduces the audience investment in events. I haven't read that book that it's based on (very proudly -- it's in the design of the title card), and maybe that's a less of a problem there.