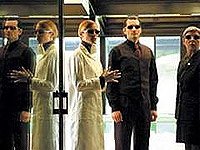 Science Fiction was really a surprise. Not only did the film exceed all my expectations but it also showed that small countries can still deliver children films that can easily compete with their American competitors. Even if they have only 5% of their budget. A strong script that is very original but still has a touch of Signs and a very suspenseful atmosphere that sometimes reminded me of David Lynch. The soundtrack is great: finally the composer of Paul Verhoeven's classic The Fourth Man showed his talent again. Great performances by local stars Koen de Bouw and Wendy Van Dijk.

A remake is logical but I still think the original will not see any problems to travel outside of Belgium.

Review by timvdm from the Internet Movie Database.