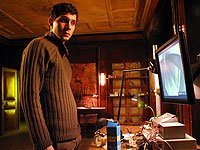 This film was an absolute chore to sit through. With some bad movies, you can actually enjoy how horrible they are. This is the sort of film that as you're watching it, you wonder if you wouldn't be better off going into the kitchen and finding out if you can fit an entire spatula inside your mouth.

The story is about Simon J (Jeremy Sisto), a socially maladjusted computer programmer. As he tries to complete some code for a sweaty man who yells at him over a web cam video feed, Simon starts to find these packages in his apartment. They're empty and he has no idea how they're getting into his place. He asks everybody he meets if they know anything about the packages - his landlord, who watches everything in the building on his bank of security camera monitors; his neighbor, who's building an android head that he treats like his young son; another neighbor, who's creating a virtual reality video game and using Simon as one of the characters; the building handyman, who talks like a man in need of psychiatric medication; Simon's courier, who delivers computer parts and emergency supplies of milk to him; and the woman who just moved in to the building, who finds Simon's pathetic inadequacies very attractive. The vague excuse of a plot in this movie sees Simon get more and more crazed as he investigates a secret conspiracy that may or may not exist while people are killed in his building and found with their brains scooped out.

This is a boring movie. All of the actors, except the striking Deborah Unger, are playing quirky and offbeat characters. Except they're not interestingly quirky, where you want to find out more about them. They're "why am I paying attention to this person" quirky, where you'd be happier if they just went away. There's no real tension generated by the story, so they try and gin it up with all this scary music and dark and gloomy settings. The plot plods along because the script dictates where it's going, not because one scene naturally leads to another. You can tell the filmmakers think they're making some sort of commentary on corporate consumerism and social isolation, but it's nothing more than rudimentary and remedial allusions to well-worn tropes.

I did happen to watch all of the deleted scenes, which I didn't expect considering how little I enjoyed the movie. But I couldn't get to sleep and wanted to know just how much worse the stuff that got cut could have been than what they left in. When I watched the scenes, I found something interesting. It's not that they were any good, but if they had been included in the film it would have made the story more understandable, more conventional and more linear. T he deleted scenes would have connected things together and instead of just being a bunch of stuff that happens, they would have turned the film into a journey with a beginning, middle and end and a reason why it starts at point A and ends up at point Z.

In watching them, I think I know why there were cut out of the film and it wasn't to try and make it any better. I think the filmmakers finished this movie, looked at it in a screening room and knew it sucked. Whatever it is they were attempting, I think they knew they failed. And then I think they had a clever idea. They went back and deleted a bunch of scenes that helped the movie make sense, cutting out the connective tissue of the story, in the hope that it would make Paranoia: 1.0 seem weird and arty enough that a certain type of viewer would look at it and convince themselves the movie is better than what it really is. I don't know if they were successful, but I do know I'm not that type of viewer.