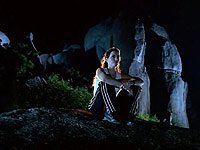 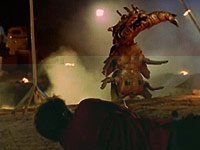 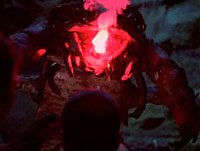 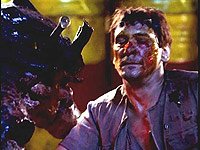 For his bachelor party, David Stone, (Larry Casey) is sent by his best friend, Jake, (Trevor Murphy) along with his friends, couple Sara, (Margaret Cash) and Dirk Doggett, (George Foster) Owen, (Matthew Pohlson) Zoe, (Danielle Kirlin) and Matt, (Steve Herd) to a cave in India to go exploring. Arriving in the cave and venturing down to the very bottom, they find a place to hold the party. When an avalanche traps them below ground, they have to explore uncharted caves to find a way out. Along the way, they run into a prehistoric race of centipedes that continuously attack them one-by-one, and the race to get out alive gets even harder.

The Good News: Here's yet another creature feature from the Sci-Fi Channel, and there is some commendable efforts here. The cave-exploration angle is pretty rife with suspense, which this one does provide some nice examples. I've always been a sucker for these underground cave movies, so this was a pretty tense movie when it got going. Caves are just naturally built to be scary, with all the different possible rock formations, stalagmites and stalactites and other rock-centered scenery, and so this one resonated pretty strongly. This one makes excellent use of the surroundings, and then it has to mix the ambient sounds of the centipedes in as well, and that only makes the scenery even more scary. The attacks scenes inside the short caves are also very well handled, and make for some thrilling sequences. There was also some nice action sequences toward the end that bulk up the ending and make it a little more than usual for these kinds of films, and the empty waste dump scenes are the best. This time around, centipedes get their own film, and they do manage on one special case: they look pretty scary. The design is nice and creepy, playing up the insect-ian aspect of their heritage int an effectively creepy creature.

The Bad News: This is yet another ordinary Sci-Fi Channel Creature Feature, so more than likely it'll have a built-in hate audience. This is the perfect film for them to cite as an example of why their movies aren't supposed to be good. This one features all the clichés that people tend to harp on about the films: really obvious special effects, lame plotting, no real original ideas and a different creature in a different location than the one before. First, the effects are really obvious right from the start. Although the centipedes look creepy, they bounce around like obvious fakes, and are quite easily noticed as such. The plot is quite easy to spell out and it seems like a cliché of a bunch of similar movies welded together, only in a different location. There was only one smart idea that was pretty nice in the film: a sequence where a centipede ate a radio and the tracking signal from it gave the impression it was the owner of the radio. Otherwise, this was pretty routine fair. Even though it was spotted coming a mile away, it was nice to see. Plus, this is a pretty cheesy film that will definitely be attacked by others for it's acting and direction, that were far from impressive.

The Final Verdict: There is a lot wrong with this one, but as a Sci-Fi Channel original Creature Feature, this was pretty much expected. It isn't in the top half of their films, but it will likely appeal to those that enjoy their films and those that are pretty much claustrophobic. Those will be the real fans of this one.