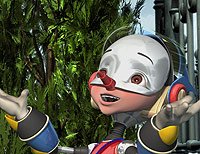 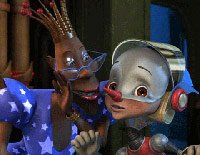 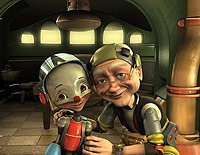 This is the fantastic story of a little robot known as Pinocchio P3K .The year is 3000 , it happens in Scamboland ruled by a villain Mayor , Gepetto is an old inventor whose greatest ambition is to become Pinocchio to be a real boy . As he creates a Cyberrobot called Pinocchio and his wish is suddenly granted by a fairy named Cyberina. Geppetto, with the assistance of his faithful helper , uncle Spencer the cyber penguin, and by the unexpected appearance of holographic fairy Cyberina , manufactures Pinocchio . Spencer acts as Pinocchio's "conscience" and keep him out of trouble ,but he is not too successful in this endeavor and most of the film is spent with the little Cyberrobot deep in problem when he goes to Scamboland , an amusement park built by the nasty Mayor whose daughter befriends Pinoccio .But before he can be given a heart and become a real boy, Cyberina insists that Pinocchio learns the difference between right and wrong.

This is strictly a fantasy-Scifi story, not a parable or a full story about lying, although that obviously is one of the messages . There are several moral messages in here, so it's a worthwhile story for kids to see whose protagonist is a likable prototype superrobot equipped for emotions. A modern adaptation that takes us into topics looking at all times to emphasize the value of the natural and human feeling over the artificial and cyberspace.

No less important is the blatant environmental message for the care of green spaces within large cities, and criticism of boundless ambition, plunder and devastate human rights of others.

While the film has an addictive color and design graphics and 3D computer generator animation itself is extremely attractive, we are in presence of a film too simplistic and Manichean in his story to end. So, unfortunately, not much progress in achieving empathy and convey emotions that excite.

Therefore we are not in the presence of a film that will be remembered by its story , or that impacts their situations but at least it's an interesting tale that has as maximum virtue to retrofit intelligently a classic flick with elements of a future technology and cyberspace.

Other versions about this vintage story are the following: the best and classic ¨Walt Disney's Pinoccio¨ 1940 adaptation by Hamilton Luske and Ben Sharpsteen ; ¨1996 The adventures of Pinocchio¨ by Steve Barron with Jonathan Taylor Thomas and Martin Landau ; ¨ Pinocchio and Gepetto or New adventures of Pinocchio (1999)¨ by Michael Anderson with Udo Kier , Warwick Davis and Gabriel Thomson ¨Pinocchio, 2001¨ with Nicoletta Braschi and Roberto Benigni as the title role and also directed . Furthermor TV miniseries (1973) directed by Luigi Comencini with Nino Manfredi and ¨Tv Pinocchio¨(1976 with Sandy Duncan and Danny Kaye .

Review by meejaboy [IMDB 24 January 2005] from the Internet Movie Database.