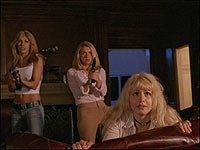 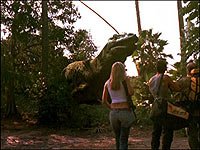 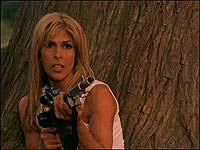 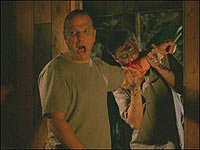 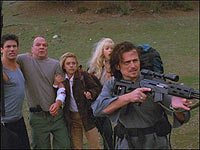 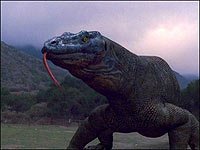 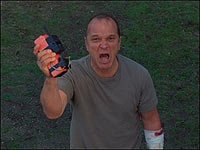 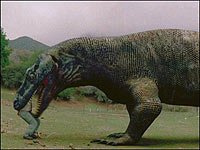 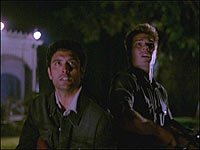 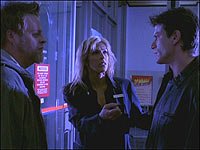 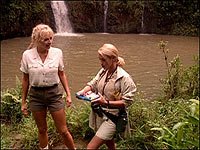 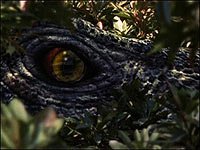 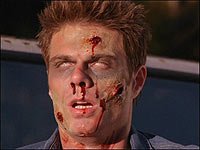 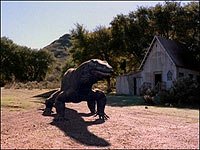 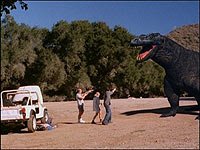 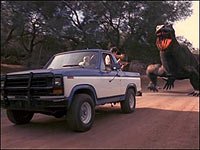 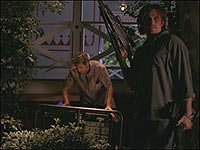 CURSE OF THE KOMODO is in fact not a sequel to Michael Lantieri's KOMODO from 1999 (with the latter being a much better film, actually). Being aware that CURSE OF THE KOMODO was directed by Jim Wynorski, I got exactly what I expected from this movie: a so bad it's good monster-flick with a high cheese & camp factor.

Casually, I'd like to mention that the comment posted by JaywriterXIII contains some interesting topics raised after viewing this film which are simply dead-on and I experienced some of the same things (and more) while watching this flick (so read it, folks).

The theme of the film is one of those "experiments with animals gone awry"-ones. On an island a few scientist have caused komodos to mutate and grow way beyond their normal size. On top that they've become highly aggressive making humans no longer stand at the top of the food-chain. Like if that isn't bad enough, it also seems that when one touches the slime produced by the komodos, heshe will turn into a rabid zombie, capable of spreading the infection. Meantime, three criminals who robbed a casino had to make an emergency landing on the island with their helicopter. Things become even more worse when the military decides to pull the plug on the whole project. You guessed it, this flick goes way over the top.

The komodos themselves are poorly made static CGI-creatures. Their roar is as standard as they come. I personally had no idea those over-sized lizards could roar at all. Maybe they also have mutated vocal chords. They also appear to be completely bulletproof, 'cause standing next to them and emptying your gun doesn't seem to hurt them. The bizarre thing is that they behave like my cat does: when I stand next to her, talk to her and throw things at her, she doesn't move. She just keeps standing there, occasionally roaring "mriiaauw" at me. But when I take a piece of rope and start running, she suddenly comes chasing me, wanting to bite everything that moves. The komodos behave in the exact same way. Bizarre.

I'm not gonna go into the acting, 'cause over-all it's as bad as it gets. The lines, dialogues and actions throughout this movie are extremely predictable or excel in utter stupidity and often are contradictory. For example: Prof. Nathan repeatedly states that komodos don't like heat and only hunt at night. Though most of the attacks occur during the day. And this is one of my favorites: When their helicopter crash-lands, the three criminals start scouting the island. When they stumble upon an abandoned car from the scientists, one of them says: "This is our ticket outta here"! They're on a friggin' island, for Christ's sake. They're gonna do what? Drive it to the bottom of the ocean and emerge with it on the other side? Way to go scriptwriter!

I was also wondering, with them being scientists experimenting on an island and all, where's the lab? No test-tubes, no microscopes, no nothing. But they did have that fancy blue-flashing fence and an expensive-looking mansion. One more thing I learned from CURSE OF THE KOMODO (and from PTERODACTYL and a zillion other horror-movies): when a blonde bimbo sees water (as in a lake or a river) she will always immediately take her cloths off and go swimming. Always. In this case, the blonde cutie-pie was Melissa Brasselle, and I feel a little bit sorry for the lady. Her character clearly was inserted in the story for only two reasons: switching the securedemergency power button onoff and... showing her boobies (and boy, what a pair they were).

I will end this "review" on a positive note. There's one jump-scene in the movie that actually worked. It took place in the cabin were they decided to spend the night. I really jumped up from my sofa. I was amazed that a movie that's the opposite of scary managed to pull that off. And I also kinda liked the last shot of the movie. Maybe typical, but still...

There's only one reason to recommend this movie, and that's for its un-intentional comedy aspects. So if you don't have the right sense of humor, you must avoid this at all costs. Actually, there's a second reason to watch this: it's a great really bad b-monster-movie flick.