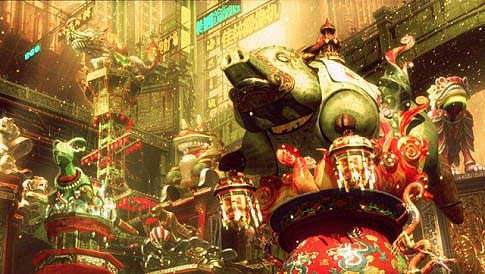 Some science fiction movies get it right. They mix interesting and novel science with fantastical-but-semi-plausible plots, and then round out the edges with a little philosophizing on the nature of man and machine and whatnot. Some science fiction movies get it wrong, and end up with uninteresting science, ridiculous plots, and way too much philosophizing. The latter Matrices gave us case-in-point examples of science fiction gone wrong. Ghost in the Shell was a good movie that got the formula right, and had good animation to boot. Ghost in the Shell 2 gets the formula wrong, badly, and the animation, which very good, is awkward for its combination of CGI, live action and hand-drawn animation. Basically, it's really boring.

Consider the following: 1) While Ghost in the Shell had interesting riffs on cyberspace and cybernetics, Ghost in the Shell 2 has a lot of Star Trekkish jargon about networks that adds little to the basic framework. There is actually a sequence of scenes that apparently consisted of human-shaped machines, hooked into other machines, talking about what was going on in their networks. I'm not sure who thought that long periods of still shots of blooping machinery with voiceovers would be equivalent to climactic action, but they were wrong.

2) Anime movies often have plots that make no sense. Like in Jin-Roh: Wolf Brigade, where everyone at some point is like, Oh well, I don't think there is a plot at all, but those drawings sure are darn nice to look at. You can't do this in Ghost in the Shell 2 because a) the pictures aren't that nice to look at, and b) the movie is trying so hard to maintain a cohesive plot that you want to try along with it. There are long periods where the writer clearly wanted the audience to be confused, so you would naturally assume that it would be explained. So you listen to what the characters say afterwards, but become frustrated at how reasons are hedged with made-up technology and a lot of talk about dolls.

3) The success of the first Ghost seems to have convinced the writer that he is now free to expound upon his topics of interest at length and the viewer will remain entertained. While there are interesting topics touched on here, albeit somewhat clichéd and overused ones, actual reflection has been passed over in favor of an astounding number of random quotes, ranging from the Bible, to John Milton, to some that may have been overheard on the street. I may be a philistine, but it seemed as if there was no greater plan tying these quotes together than the simple goal of having a lot of quotes, and the result borders on the inane. Especially because almost every character in the film is a complete and utter nihilist, delivering their lines as if they had long ago resigned themselves to death, the dialogue becomes intensely uninteresting. And I wouldn't hold my breath for badass action scenes to pick it up, eithermost of the time the only punctuation to these listless conversations is the whizzing of some random mechanical part.

This is all very sad because clearly there were high aspirations for this movie. The animation is very well intricate, and at times almost awe-inspiring. The movie keeps its own pace, and the characters stay true to form. It's possible that a lot of these complaints are the product of awful, awful subtitling, and it was pretty awful, since it was actually closed captioning, with lots of (noise) and (silence]).

Review by xiaoeno from the Internet Movie Database.