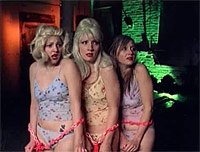 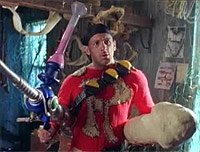 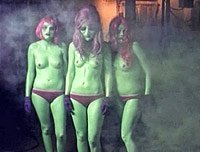 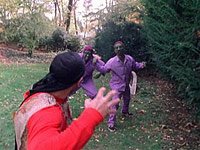 "Die you Zombie bastards," is a film that attempts to tell a humorous tale about world domination via a zombie making machine. The main conflict is between a cannibalistic hero an alien mad scientist. While this is an enjoyable film, the end product contains almost no redeemable film making. In essence, the film is a lengthy inside joke told very poorly.

The main problems with the film lie in the assumptions that it presumes. First, odd and sociopathic behavior are used as the driving force of humor. This assumption is not in and of itself flawed. However, use of socially taboo behavior as a joke does require some finesse and context to be effective. "DYZB," provides the bare minimum of context. The audience is made aware that the story takes place on earth and is conducted by people best described as stupid. Such a stark and simplistic context causes all attempts at humor to appear as puerile silliness and shock rather than comedy with any depth. A second assumption is that taboo characters are something that people want to see. To be fair, the idea of a cannibalistic hero was a drawing point. Yet, the utter lack of any development leads a viewer to disconnect the character from the actor. Essentially, one sees a person moving around and one knows that the character is a cannibal, yet, one does not necessarily care. The attempt to bolster a shockingly low budget film with quirky characters is a complete failure. A last assumption is that stringing a series of sketches together will lead to a full story and film. This is only half correct. "DYZB," is technically a film; however, it is quite fairly critiqued as being devoid of story. Basically, the film is summarized as: A man searches for his wife and also saves the world from a zombie machine. While it is true that many great ideas begin small, this is neither great nor an idea really. "DYZB," is a fragmented set of scenes loosely tied together by an incoherent idea and characterless characters.

The above critique is purposefully harsh. The film is actually objectively bad. The production qualities are nil. The camera and camera work are sub-par. The acting ranges from wooden to overdone. The editing and story pacing is amateur at its best moments. The sound and special effects are all clearly purchased at a dollar store. In essence, this is a terrible film. With all of the above said, the film is actually enjoyable. The bad of this film is humorous. "DYZB," is clearly a stupid idea loved into existence by film students who are probably slightly behind the curve. The point that shines through is that fun was had during the making of this film. Despite being a technical and storytelling failure, the film has brief moments that are both fun and humorous. Basically, this is a film made more for the people in it than for an audience; yet, sometimes the audience is included in the joke.

On a personal note, I will recommend this film to exactly one friend. It is technically a zombie film and thus part of the full zombie experience. The only other advice I have is: 1) Watch this with a group of people.

Review by smccar77 from the Internet Movie Database.