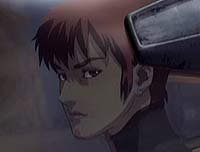 When science fiction-fantasy animation comes to mind, no doubt you'll look towards the land of the rising sun for definitive versions of the genre, and there are plenty of quality material to choose from, given the wealth of material and works by animators and filmmakers alike. Wonderful Days will mark my first Korean movie in this genre that deals with ailing worlds and its fair share of mecha-like vehicles to tickle the visual senses with its eye for detail.

Visually, the movie is stunning, especially when it combines 2D animation with a 3D world built from realistic models to give it visual depth, and spruced up with computer graphics. As mentioned, attention to detail is remarkable, and the fight sequences, even though the characters aren't using any fancy weapons, with very ordinary looking handguns as weapons of choice, they manage to thrill with its three-dimensionality and sheer energy that got translated seamlessly for the screen, and I can only imagine watching this on the big screen, where I will likely duck from objects being thrown about.

Impressive set action pieces that glue the movie together, but the story fell a bit short, as anime fans will likely be a little bit bored with the same-old storyline involving oppressive societies, exploitation of the weak masses, the arrival of a messiah to put things right, a love triangle, and something which I thought was topical for today, that of pollution. In the year 2142, the world is destroyed by an ecological disaster, and the remaining few of humankind live in an outpost known as the Ecoban, which curiously enough, pollutes the environment outside more as it maintains survivability inside.

The story felt a little bit like Vexille as well (along with a lot more other anime of this genre), with the rebels trying to infiltrate the Delcos system to stop further annihilation of slaves and their land in order to keep Ecoban running, and this brings our heroine Jay to come into contact with brooding ex-Ecoban colleague turned rebel Shua, You'd come to be one step ahead along the way as you slowly learn of their respective back stories, and just when you thought you could forgive its many plot elements which got introduced sans explanation, and bear with the characters for a bit, then came the operatic tragedy of a finale which somehow took away a lot of its shine, and dragged on so much that it's easy to condemn the movie thereafter with its clumsy dealing of the caricature-like antagonists, despite its superb animation.

But there's a saving grace. Ever since The Fountain, I haven't been able to be swayed that much by a movie's score, until now. The Wonderful Days soundtrack just carries the movie on its own, never mind the relatively weak plot, which received a tremendous boost by the emotive tracks that spoke volumes. In particular, I enjoyed the track "A Prayer", which surprisingly was in English and played at apt moments in the movie, and especially "Mars Theme", even though tracks of such nature are likely necessary to provide that additional emotional oomph which it delivered more than proportionately to the story.

Review by DICK STEEL from the Internet Movie Database.