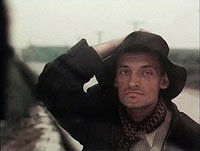 If not exactly a masterpiece, this was definitely worth watching. Alexander Mirer's novel, only the first part of which is here put on screen, was written in the early 1970s, with no especial political agenda. However in this 1990 version, we are dealing with an exercise in perestroika thinking, for this is a genre commentary on horrors of totalitarianism for inmates of totalitarian regime, done from the point of view slightly less totalitarian, or at least no- longer-so-totalitarian-as-before. Curious, yes. All done in the space-trooper-fell-on-my-girl low-cost style with military helicopters.

As it sometimes happens, the film is much better than the original novel that was done shoddily and aimed at brain-damaged soviet kids. Shell-shocked pacing here, of course, helps, as well as the marvelous avant-atmospheric soundtrack by the premier soviet jazz giant Chekasin. Actors don't act but this is the case when they don't need to; it is enough for them to move around, and not interfere with the camera. The film has some hidden Easter eggs in it, like visual tributes to a number European and American artistes, including, of course, Tarkovsky (and his famous tile sequence), Fellini (and his carnival freaks), etc.

Review by Max Nemtsov from the Internet Movie Database.