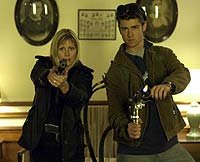 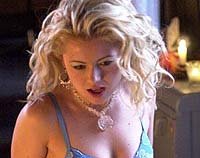 Genre-blending is a timeless art where regaining the interest of a jaded or exhausted audience is concerned. Unfortunately, it is also a tricky act to pull off thanks in no small part to the delicate balance between the two disparate elements. So while the blending of the sex comedy genre that has been bludgeoned to death in Hollywood with the monster mash genre that seems to have overridden science fiction looks good on paper, it requires a few things at the execution stage in order to work. The first, and definitely most important element to put in place is a clever script that blends the best of the prospective genres whilst shedding most of the worst. A good example would be Aliens, in which science fiction, horror, and action conjoin into a gripping story of human beings fighting their own worst natures. Once a good script is in place, good direction and good actors are really needed to follow. In fact, some attempts to blend genres that lack a good script can even be saved by a good director or a good cast.

The problem with Decoys, in a nutshell, is that it has absolutely none of these things. The director seems content to set his camera in front of his subjects and leave it running whilst they run through their lines. The actors, in turn, seem to be merely reciting lines and going through the motions. This, not unnaturally, leaves the audience standing on the outside of the film's reality rather than entering it. Of course, one could recover from this by making a film that is bad or oddball enough to be funny. This is not even attempted in Decoys. The concept of aliens landing on Earth with the mission of mating with the locals in order to facilitate some sort of continuation of their species is one rife for comedy. Granted, making a credible horror out of this concept is a difficult task, as Species proved in 1995, but the problem in Decoys is that nobody even seems to be trying. The film gives us little in the way of clues as to how to respond.

Furthering the problem is the cast. Meghan Ory steals the show as a potential girlfriend for Corey Sevier's protagonist, but when she is not in the frame, the weakness of the rest of the cast shines through like a desk lamp before the face. Nicole Eggert and Richard Burgi cannot act their way out of wet paper bags, and the latter's attempts to portray a hard-nosed detective who is convinced he is pursuing a new Ted Bundy shatter the reality of every scene he is in. Canada certainly has a better pool of talent available than this rot would have you believe. Every time one watches Bryan Singer's adaptations of the X-Men, one can see that much. The problem is that for every major talent in any sector of the industry, there has to be a dozen or so dregs. The cast of Decoys would appear to be a collection of every dreg that Canada has on offer. Sevier barely possesses the skill to appear in a menswear commercial, and aside from Ory, he is the best element of the cast. Thankfully, this problem was addressed somewhat in the sequel.

Another strike against Decoys would be the terrible writing. At one point, we are given a scene in which one of the aliens tells the human male she is about to attempt to mate with exactly why she and her fellow aliens are there. In the hands of a great director like Bryan Singer or Kenneth Johnson, this could have turned into a plot subthread that would hook the audience as the alien in question struggles with her own nature. Instead, we are simply given more scenes in which sex and death are equated, while a level of misogyny rarely seen outside of America is on display. Granted, a motive for the actions of the characters is provided, but a good motive is like a good engine. If you do not maintain it adequately throughout the time in which you are using it, it will begin to fall apart. Characters begin to follow the protagonist's plan of action without needing to be adequately convinced, motivations change at the drop of a hat, and twists commit the ultimate sin. They are telegraphed in advance whilst making no real sense in light of the rest of the film at all.

As I have hinted earlier, some of the problems with Decoys were corrected in Decoys 2. Aside from the addition of better cast members, better humour, and a more developed story, Decoys 2 also delivers a bit of mild suspense. Another problem in the original Decoys is that any suspense or interest is destroyed for storytelling convenience. The susceptibility of the alien race to heat above room temperature is probably the biggest problem that these characters suffer. While it is not as idiotic as making the aliens in Signs fatally vulnerable to water, it does beg a few questions. Granted, I am not familiar with Canada in any sense, but surely they must have days when one does not require an ice pick to breathe out. Even Norway has those from time to time. But by now, you might have noticed I am picking all sorts of myriad details apart regarding Decoys. And that is the biggest point I wish to make here. A good film has plot holes, but manages to distract the viewer from them. A bad film displays its plot holes and even exaggerates them by force of numbers. Decoys is therefore a very bad film.

I gave Decoys a four out of ten. Two of those points are for a touching scene in which Kim Poirier demonstrates a third dimension to her character, and Meghan Ory. The rest of the film is a damp squib.

Review by mentalcritic from the Internet Movie Database.