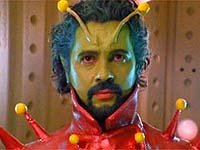 Christmas on Mars, the debut feature of Wayne Coyne and my beloved Flaming Lips, is just as psychotic, obtuse, and delightfully up its own ass as anyone familiar with the band might expect. The film is centered around a small human colony on Mars, its patrons just barely coping with existential despair in the face of vacuous space as Christmas approaches--of course.

The medium offers mixed returns for the Lips: besides its obvious psychedelic opportunities, film allows Coyne and company to occasionally subvert cultural iconography and to deliver an endless barrage of vaginal imagery; the former visual tactic being arguably more artful. Film also means dialog, however, which isn't Coyne's strong suit: where his music often packs big ideas into few words, his sprawling drugisms have trouble supporting a narrative diegesis.

If there's one thing that's truly excellent about the film, it's the trippy, operatic music--one wishes the Lips were approached for film scores more often. It is also buoyed by a few fun performances: guitarist Steven Drozd is charismatically subdued, and Mark DeGraffenried adds an essential sense of humor as the foul-mouthed Captain Icaria. I can't say how well this film will play to those uninitiated in the Flaming Lips' discography, but for those of us who are fans, there's a certain pleasure of recognition in seeing Wayne Coyne in green antennae inexplicably dropping out of space to don a Santa suit: it's completely unexpected, and that's just what we expect.

Review by Ted from the Internet Movie Database.