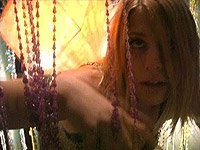 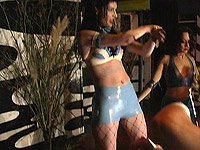 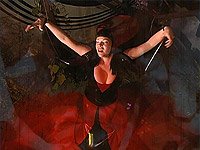 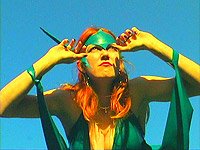 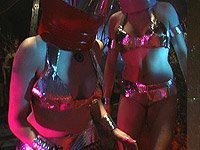 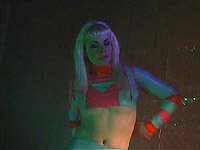 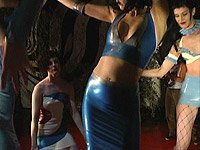 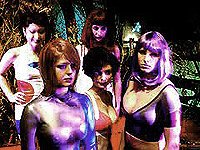 This is the brief story of a bunch of male space explorers looking for women to impregnate before they are no longer able to have children. Somehow they end up on a planet where they are captured and chatter as women in latex clothing fight each other and roll around on the floor to really bad music. I can't say more than that because there really isn't much more to it than that. (There may have been but I stopped caring) Can we say cheap? Can we say shot on video badness? Can we please have an Ed Wood film, or better yet Orgy of the Dead where the women were at least topless? Could we please have anything perhaps even a large rusted needle to poke out my eyes? This set bound disaster is billed as being in the style of Barbarella. Say what you will that had a plot, and acting, and something approaching other than a bad TV talk show style set. This is awful.

Should you be stupid enough to actually watch this you may want to be warned of the use of about ten or fifteen seconds of hardcore sex appearing during the solarized entrance from the desert to the blue bubble. Its off to one side of the screen and would not be really noticeable except the video effect only partially obscures it and so its the only thing you can really see.I had to go back to see what it was since it seemed out of place. Its not a reason to pick this up, but parents who intend to destroy their children's minds by showing this film to them may be offended, I was bored.

Simply one of the worst piles of dog waste ever made.

Review by dbborroughs from the Internet Movie Database.