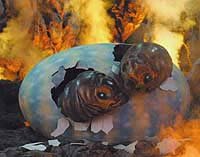 The Millennium-Era series of "Godzilla" features - released over a five-year period between 1999 and 2004 in Japan - is an interesting film series, to say the least. I have been slow in getting to it, having grown up on both the Showa-Era (1954-1975) and Heisei-Era (1984-1995) "Godzilla" film series. The first film I ever saw from the Millennium Era was 1999's "Godzilla 2000" - which, as I remarked in another review - was the last film I ever saw at the now-defunct Cineplex Odeon at my local shopping mall before it closed down forever in early 2000. I was 14 when that movie came out and when the Cineplex Odeon finally closed its doors.

Just yesterday, I watched "Godzilla Against Mechagodzilla" (2002). Today, I just finished watching its direct 2003 sequel, "Godzilla: Tokyo S.O.S." When I remarked how interesting the Millennium Era is, I mean that it's interesting in that like the Heisei-Era "Godzilla" films, it completely disregards all the films that came before it - pretending that they never happened - and instead goes right back to "Gojira" (1954), the gloomy black & white monster flick that started it all. But unlike the Heisei Era, each film in the Millennium series is a stand-alone feature that not only disregards all previous "Godzilla" features from different eras, but each film in the Millennium Era prior to it is also disregarded. So, in other words, "Godzilla Against Mechagodzilla" disregarded the three films that preceded it.

"Godzilla Against Mechagodzilla" is the only film to have a sequel, which is "Godzilla: Tokyo S.O.S." "Tokyo S.O.S." is a better film than its predecessor, and also a unique one. Since "Godzilla Against Mechagodzilla" and "Godzilla: Tokyo S.O.S." are stand-alone features that started 45 years after "Gojira" - these two films are unique in that they also include a loose continuity of sorts with other non-Godzilla-related Toho "kaiju-eiga" (Japanese giant monster films), namely "Mothra" (1961) and "War of the Gargantuas" (1966); for this sequel, "Mothra" is the film most referenced and shares the greatest continuity, and it also includes a few references to "Godzilla vs. Mothra" (1964) - the latter film of which has the benefit of being Godzilla's last portrayal as the bad guy in the Showa-Era film series.

"Godzilla: Tokyo S.O.S." is set in 2004, one year after Godzilla ravaged Japan, but was thwarted by the Japan Self-Defense Forces' (JSDF) Mechagodzilla, a.k.a., "Kiryu" (meaning, "Machine Dragon" in Japanese). Mechagodzilla, as you remember, was built around the remains of the first Godzilla that was killed in 1954, and shares that long-dead monster's genetic memories. Though Mechagodzilla managed to save Japan from Godzilla, the monster cyborg was heavily damaged and needed to be repaired.

Now, the JSDF is pondering whether or not to deploy Mechagodzilla into the field again, being that its most powerful weapon, the Absolute Zero, is damaged beyond repair and without it, Mechagodzilla will not be able to defend the country against Godzilla. Japan Air Self-Defense Force (JASDF) mechanic Yoshito Chujo (Noboru Kaneko) is on vacation at his uncle's house when he's visited by the Shobijin (Masami Nagasawa and Chihiro Ohtsuka), the miniature twin fairies who act as guardians for the benevolent insect monster-god Mothra. Chujo's uncle is none other than Dr. Shinichi Chujo (the late Hiroshi Koizumi), the Japanese linguist who first discovered Mothra and the Shobijin on their native Infant Island and witnessed Mothra's subsequent destructive rampage in Japan 43 years earlier in 1961.

The Shobijin have come to warn them that because Mechagodzilla is built around the skeletal remains of the original 1954 Godzilla, that this is why Godzilla keeps returning to attack Japan. If Mechagodzilla is returned to the bottom of the Pacific Ocean, then Mothra will gladly take its place to guard Japan from Godzilla's attacks. Meanwhile, Godzilla surfaces once again to attack Japan, and Mothra joins the fray. Pretty soon, though, the JSDF also realizes that Mothra alone will not be enough, and that they have no choice but to deploy Mechagodzilla once again into battle - but the question remains of whether or not the mighty Mechagodzilla will survive another lethal encounter with Godzilla?

Maasaki Tezuka returns behind the camera to direct this stellar follow-up to "Godzilla Against Mechagodzilla." The greatest thing to be said about this feature is to see Hiroshi Koizumi, a regular during the Showa Era in numerous Toho kaiju-eiga, reprising a role he first took on over 40 years earlier. As a supporting player to a younger generation of cast members, Noboru Kaneko makes for an effective leading performer who is dedicated to his job and knows every inch, inside & out, of the cyborg creature that he has been charged with maintaining. He also has a close friendship with Kiryu pilot Azusa Kisaragi (Miho Yoshioka) - having replaced Akane Yashiro (Yumiko Shaku) from the previous film and who appears here in a brief cameo. I was a little startled to learn that Yumiko Shaku wasn't going to be the lead in this sequel, as I did find her replacement in Miho Yoshioka to not be as engaging or sympathetic as she was in "Godzilla Against Mechagodzilla." This was really my only serious disappointment with this flick.

"Godzilla: Tokyo S.O.S." has some stellar monster battles, a beautiful reappearance of Mothra, and an awesome mix of old & new (in more ways than one). This was the last film before the all-out monster battle royale that was this series' epic closer, "Godzilla: Final Wars" (2004).