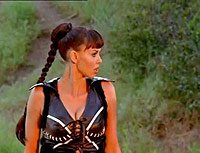 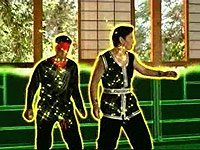 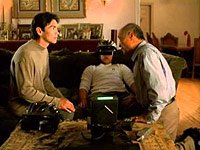 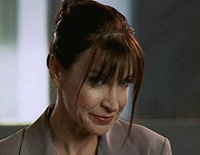 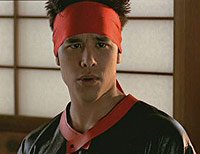 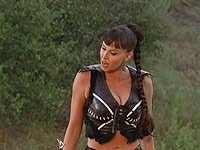 I've always had a soft spot for Don "The Dragon" Wilson's films. None of them are great films, but the likes of the Cybertracker films, Ring Of Fire series and Out For Blood with PM Entertainment were very entertaining B-flicks. However, signing a contract with Roger Corman probably wasn't the wisest idea as many of these films are low quality and not very interesting. I wasn't expecting a lot from this when I rented it, but wasn't ready for incredibly bad cinematic cheesefest thrown at me. This is a bad film. This is BAD. Although it may have some comedy value, there are far more more entertaining examples of "so bad it's good" films so I can't think of one good reason to watch this.

If anything, the career of Art Camacho serves as proof that sometimes the production company has more influence on a film than the director. The only film he directed that was actually worth anything was "Recoil" for PM Entertainment but everything in it screams "Joseph Merhi" who was the main man behind PM Entertainment and bears nothing in common with the movies Art Camacho directed for other production companies, so I highly doubt he was responsible for making the movie turn out the way it did. Since the demise of PM he's been responsible for ultra forgettable efforts like 13 Dead Men and Redemption as well as the hilariously bad Albert Pyun tribute film Gangland. But with Sci-Fighter it seems he's hit a new low!

First, it's quite remarkable that a movie like this could be made in 2004. The whole "Virtual Reality" thing is so 1992. There's a good reason why nobody makes movies like "The Lawnmower Man" and "Arcade" anymore, and that's because computers have become an integral part of our everyday life and nobody finds it scary anymore. Likewise, "Virtual Reality" has all but died. Nobody is really interested in plugging some bulky object into their head anymore and awkwardly trying to control it through a sub-standard design as the good old computer monitor or TV screen is a lot more convenient and comfortable. The antiquated plot is about a "genius" who creates a virtual reality fighting sim for his grandson. Apparently while you're playing it takes control of your mind so in case you hadn't already figured something similar, a virus gets into it and locks his mind inside the game so his Dad jumps to the rescue and the only way to free him is to complete every level according to Grandpa. Woohoo! Sounds great doesn't it? Now let's just think about that for a second shall we? A virus gets into it? Firstly, viruses can't just generate out of nowhere. Programmers write viruses. And a virus that runs on one platform won't work as another in the same vein that a PS2 game won't work in an XBOX. Somebody would have had to have coded a virus for this game while it was in production. And dang, how does old Grandpa know that the only way out is to complete all the levels if he's never seen the virus before? But we're getting carried away now, as we all know this completely stupid and nonsensical plot is just a thin excuse for fight scene after fight scene. So how does it fair on this scale? Not very well, is the answer. All of the fights take place in areas clearly inspired from beat em up video games but unfortunately none of them are particularly well choreographed and have no real interesting touches so it just comes off as tiresome.

As for the performances, all I really thought about Don was "poor guy". He's just left with a bad part, and when his character isn't fighting, all he does is moan about his sons behaviour. Even when Grandpa shows him this virtual reality game, he just hits out with "There's no way he's going to be playing this". Would you respond like that if you were introduced to a device which brought your mind into another world? And then there's Cynthia Rothrock, who goes around dressed in clothes that look 25 years too young for her. At one point she's referred to as "a lovely young lady" which gave me a good laugh. As for Lorenzo Lamas, he's there. There I said, he's there. No more, no less. He only appears in a few scenes and interacts with about 2 other characters. I'm still trying to come up with a good reason for this character to exist, and I'm not finding one. It's painfully obvious that he was just cast for name value alone so they can plaster the names of three B-grade stars on the cover.

Overall, the premise made this doomed from the start but I wasn't expecting the huge levels of stupidity it threw at me. It's cheap, it's boring and although there are a few unintentional laughs along the line, they aren't worthy of the price of a rental. Best left to collect dust at the bottom of the video shelf for years to come.