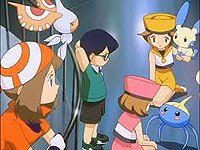 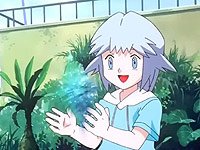 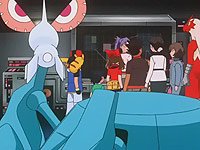 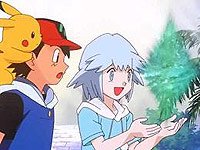 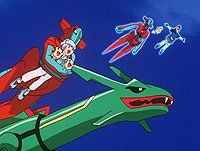 In my ongoing quest to destroy my childhood I have set out to (re)watch all Pokémon films, and see how they hold up now that I am an adult. I remember seeing "Pokémon: Destiny Deoxys" as a child, and finding the battles between Deoxys and Rayquaza one of the most awesome things I had ever seen. Watching the film today, I found myself primarily bored, and frightened by the notion that it is 1 hour and 38 minutes long. Fortunately, there was a little game I could play to keep myself entertained while watching: Spot the inciting incident.

For beginners: The inciting incident is what fires a story's plot, for example L.B. Jeffries witnessing a possible murder in "Rear Window," or Luke Skywalker buying R2-D2 in "Star Wars."

"Destiny Deoxys," starts off with the extra-terrestrial Pokémon Deoxys crash-landing on earth and fighting the Rayquaza whose territory it has disturbed. No worries, nothing has been incited yet. I was tempted to think it had, but after the battle, Deoxys and Rayquaza scarper, so that was that: 15 minutes of hollow spectacle during which the protagonists haven't even shown up yet.

Matters improve little when they do. Ash and Co. are visiting city du jour to enter a contest. Regular viewers will know this means 15 minutes of battling to pad the runtime. As a slight variation, Ash is accidentally joined in the tournament by a boy named Tory, despite him being no trainer. Indeed, the child happens to have a paralysing phobia of Pokémon in general. This is clearly meant to force in a character arc and make it seem like something important happened during the film's runtime, but the writers don't bother to put in any effort. Things happening isn't the film's strong point anyway.

After these cumulative 30 minutes, Deoxys appears above the city and, ehrm, shines a light for a couple of seconds. 'The inciting incident radically upsets the balance of forces in the protagonist's life,' Robert McKee tells us in his screenwriting guide "Story." Well, so far Deoxys has only radically upset the balance of our heroes' panorama.

A stronger case for the film's first important moment would be Rayquaza nearing the city, prompting the mayor to evacuate the entire population. Besides the fact that this seems a tad drastic to me, this only forces Ash and Co. to walk a few miles and have lunch elsewhere. You can lean back again safely: Nothing has happened yet, although we are treated to some wonderful dialogue: 'Oh no, it's a Munchlax, and they love to eat!' Brock shouts after we have witnessed the Pokémon devour an entire picnic. Thanks, Brock, for clarifying.

When Deoxys, after 50 minutes, forces the protagonists to take shelter, it would seem the plot's gears have finally started to turn. Going out to get food, the team is attacked, and a Minun that Tory had gotten attached to is kidnapped. Finally! This must be the inciting incident! After one hour of faffing about, Ash has an quest to go on: Freeing Minun from Deoxys....Except he doesn't. Instead, Tory gets a 'there, there,' and everyone goes back to their shelter.

While hiding, the protagonists discover a crystal that may contain the answer to Deoxys' aggressiveness, and find that they need to turn on the building's power in order to open it. Here, after more than an hour, the heroes have found their goal, just in time for the story's final act.

If anything, the film becomes more boring once its plot has been incited. During some mediocrely animated chase scenes, Ash and Co. succeed in fiddling their MacGuffin, after which Deoxys and Rayquaza sort out matters for themselves. Doing so, they make the city's security go berserk and have to climactically defend themselves against a mass of green cubes. So ultimately, Deoxys' purpose in this film was making the heroes battle the actual threat: a horde of geometrical shapes. Not quite the epic I remembered.

Not everybody may share my emphasis on story and structure, but "Destiny Deoxys" is a prime example of a film ruined by its incompetence in these areas. Why are we supposed to care about anything before actual stakes have been introduced? Of afterwards, for that matter? I couldn't say, and neither could the writers. The big-name battles that are "Deoxys"'s sole appeal would have been a cherry on top of the pie had they been relevant, but the absence of a decent framework leaves the film as a plate of topping: Overly sweet, insubstantial, and probably bad for your health.

Review by Shostakovich343 from the Internet Movie Database.