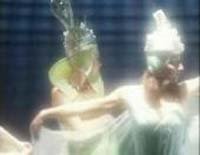 Monarch of the Moon may lack the authenticity of the original 1940s serials, but very little else is missing. The Lowry brothers and their crew have lovingly crafted a tribute to the likes of King of the Rocketmen, Zombies from the Stratosphere, The Black Widow, The Phantom, Dick Tracy etc... The DVD allows you the option to view the feature in colour or in good ol' black and white. Monarch of the Moon is best viewed in Black and white, the heavy shadows don't fair too well in colour. Blane Wheatley is a wonderful protagonist, who over acts perfectly without making a mockery of his role. Monica Himmelheber is gorgeous.

Serials are a risky genre to tackle. Simply put, people either "get it" or hate it. It's a genre that is filled with ridiculousness that doesn't strive to be serious. It borrows from an era when anything was possible, a golden age for western society that has since had it's "can do anything" attitude replaced with scepticism and doubt. Modern movie goers need their crazy served to them in a serious, "believable" manner (Transformers). God forbid that a viewer should still have to rely on their imagination while watching a flick... This isn't an attempt to sound like a snob. It's just a honest observation that audiences prefer the wonders of modern CG (which in recent years has proved that it can produce damn near anything and look amazing) to stylish (possibly (and in this case) low budget) fx.

I enjoyed Monarch of the Moon greatly. My only complaint with the feature would be that it struggles to include unnecessary comedic roles and tidbits. It sadly dumbs down the feature at points and disrupts the pacing.

Fans of the old Republic serials should enjoy Monarch of the Moon. It's fun and doesn't let the genre down. It's also incredibly interesting to see new methods of cinematography used to recreate rich archaic styles. Sadly, anything relating to serials of the past is doomed to only be praised if it is a slick reference hidden in Lost or a J.J. Abrahms internet teaser pic. Feature length tributes such as Sky Captain and the World of Tomorrow and Monarch of the Moon appear to be losing their spot in Hollywood. Indiana Jones and the Crystal Skulls was mocked for it's now infamous fridge scene. Yet this scene fits perfectly in a serial inspired production. I felt it was a great way of capturing the heroes inevitable demise that concludes each chapter of a serial, only to have his miraculous survival explained a week later. Crystal Skulls failed as a movie for other reasons, the oft mocked fridge scene is just misunderstood.

There is an audience for the serial genre, I hope that creative minds will continue to figure out ways in which to keep it alive.

Review by Iota Electron
from the Internet Movie Database.