TV Spot - I Present To You The Tachyon-Amplifier
0:30 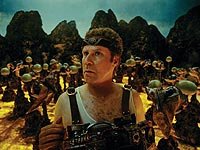 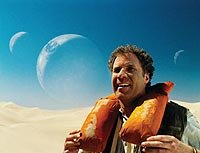 Having never seen an episode of Land of the Lost, it is hard to judge the film as anything other than the next entry into the hall of zany Will Ferrell comedies. He plays Dr. Rick Marshall, a scientist laughed off the Today show for his theories regarding alternate dimensions and periods of time flux. A few years later, a budding doctorate student named Holly (Anna Friel) convinces him to continue his research into the idea, and going on a hunch inside a grimy water trail lead by the obnoxious Will (Danny McBride). Sure enough, the group end up in a totally different time where dinosaurs roam amongst apehuman hybrids and creatures referred to as Sleestaks.

It sounds needlessly complicated, and unfortunately for Land of the Lost, it comes off as trying to hard in many areas. On one hand, it wants to throw a bunch of scientific terms and ideas at the audience to try and claim it has some semblance of being smart, but then takes it all back by inserting a whole plethora of jokes involving poop, breasts, drugs and homosexuality. Apparently, somewhere along the line of production, the cast and crew missed the memo about how unfunny and unoriginal these jokes are in 2009. Sure, some of them are fairly amusing (and a few are laugh-out-loud hilarious), but many of the jokes are used throughout the movie over and over again, in the same ways. Apparently they missed the memo about beating a dead horse at the same time.

There is a lot of obvious camp sprinkled throughout the film, but that does not give it an excuse for feeling so stale and undercooked. Many of the jokes not involving anything mentioned above are totally hit or miss; there is no middle ground to be found at all. And of course, the film is a grand showcase for Ferrell to play another clueless idiot, thrown into a totally unrealistic situation. While his shtick has not worn as thin as the work of comedians like Jim Carrey, Adam Sandler or Ben Stiller (albeit, the latter two seem to be on a career rebound as of late), it is starting to lose its appeal rather quickly. And while McBride holds his own for the most part, Friel and a nearly unrecognizable Jorma Taccone (of Lonely Island and Saturday Night Live fame) are forced to endure through Ferrell acting through one ridiculous idea after the other. I found myself so divided over the jokes that I actually became baffled at why so many audience members in the preview crowd thought the film was such a riot.

McBride is actually the saving grace for the film. He nails almost every line and reaction perfectly, continuing to cement his status as the obnoxious and pompous jackass supporting character. He never resorts to the foolish heights Ferrell puts himself through (even during a silly drug-fueled sequence that drags itself out for far too long), and seems very content at playing the absurd straight co-star. While his attitude is a bit overwhelming at certain intervals, he just has too much charisma not to be liked on screen. He believes in his character, and he makes it shine from beginning to end.

But while the opening bit and many of the jokes are a mess, I was pleasantly surprised at the amount of adventure that takes place throughout the film. It feels like an extended chase film at certain points (especially because of the Tyrannosaurus Rex constantly gunning for Ferrell), but it manages to slow itself down to really allow the audience to take in the ideas it is trying to explore and get across. There are some highly extravagant and clever ideas on display here, and when the film wants to, it really allows the camera (and the audience) to appreciate and take all the interesting things in. But since it blows through the majority of its running time (when it is not stalling on certain sequences), these slow-down moments come very few and far between.

The special effects are also quite marvelous to look at. Although the entire film looks like it needed a lot less green screened effects, there is still plenty of obvious effort put into the creatures that show up during the film. The showpiece of a Tyrannosaurus Rex is incredibly detailed, and downright terrifying in some instances. It is not the game changer like the T-Rex in Jurassic Park was sixteen years ago, but it still looks relatively magnificent. The makeup effects to bring the apehuman hybrids and Sleestaks to life are just as good, if not better. What I did not like was how fake many of the effects look. I imagine this was done specifically to align it with the show, but some are so glaringly bad that the filmmakers should have put in more work in the post production to make them look a little more realistic. After being horrifically disappointed in the graphics in X-Men Origins: Wolverine, I was not expecting another film to appear so soon that looked like it needed more effects work. I was wrong in that assumption, but at least the effort was put in here to make them look great nonetheless.

I was not expecting a lot out of Land of the Lost, but parts did surprise me. I did laugh quite a few times, and while they work to mixed effect, the special effects and makeup are amazingly well done. But there is still plenty wrong with the film, whether it be the messy opening, the off-the-wall pacing of the film, the bad jokes or Ferrell himself. It wants to be a better movie, but it does not seem to know how to do it. Relying on McBride as a crutch can only work so much.

Review by DonFishies from the Internet Movie Database.