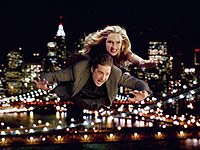 Movies like My Super Ex-Girlfriend really make me question the Hollywood greenlighting process. For every amazing movie, there are about ten clunkers like this. It always makes me wonder whether the studio executives overseeing the productions of movies like this actually think a worthwhile investment has been made, or if they just think that such a crappy movie will actually turn into a half decent movie halfway along the making of it. Unfortunately, this film just seems like it fell into a chasm of wasted ideas, talent and humour.

As anyone can guess from the movie's title, the film concerns a superhero, G-GirlJenny (Uma Thurman), and her boyfriend Matt (Luke Wilson). They start going out, and even with things going good, Matt begins seeing a few quirks in Jenny that he does not quite like, and they break up. She flips out, and the rest of the movie is spent with her wrecking havoc on Matt's life.

The trailers seem to suggest that this lasts for the majority of the movie. But in reality, the movie runs ninety-five minutes long, and fifty of those minutes are the lead-up to the break-up. Did the filmmakers really think they could drag the movie through the mud that long without it showing some obvious sag? Clearly, they did not.

For My Super Ex-Girlfriend is one unfunny joke after another. It sets them up rather nicely, but the follow through just does not seem to jive with what I think anyone could even imagine to think is remotely funny. They all seem instead to feel either half-baked, or half-enthused. All of the funniest moments are in the trailers, and even they seem to not hit any of the marks when they actually happen in the film. They just end up being rather dull, and lifeless. The fact that none of the cast or filmmakers seem to even be trying to make anything actually work as any proper comedy would, is an even greater testament to why this film should not have even bothered going past the first day of production.

Every one of the main cast members seem to have their minds on something else.

Thurman, gorgeous as she is, just does not seem to really believe in her character and her quirkiness. Not once does she have a believable look on her face, and even less does she actually look like she is enjoying what she is doing. With every scene passing, it looks more like she got roped into doing this crappy movie somehow, and is regretting every single frame of film she is being captured on. You compare a subpar performance like this to something brilliant like in Kill Bill, and you can really begin to tell how disheartened she looks at acting as this one-dimensionally confused individual. Hell, the film does not even bother saying what her actual powers are. It just gives us a taste of all sorts of random things she can do (think almost everything Superman is known for, and give it a feminine spin), and never really bothers to explain the mish-mash of powers (although it does offer a rather intriguing point of origin for her powers).

Wilson fares even worse. Yet again, someone genuinely thought that he could lead a movie alongside barely anyone who even could attempt to overshadow him. Wilson has never fared great as the leading man, and it is doubtful that he ever will. He is better suited as the supporting character because his dense and half-witted charm actually works when it is not the main thing being focused on. When it is, it just comes off far too much and offers far too little by way of him actually doing anything worthwhile. I found myself cringing when he was talking on-screen, and actually dreading the idea of continuing to watch the movie because of it. His performance is just so bad, and with the exception of maybe a moment or two, just may be the single worst performance of his entire career.

The rest of the supporting cast is a bit of a crap shoot. Anna Faris, as the other girl in Matt's life, is alright to a point in her role, but quickly becomes annoying. We know she can be funny, and we know she can deliver when she needs to. It looks like someone told her to hold back here, so she gets very little to do other than to look baffled and complain (until the bizarre ending that is). Eddie Izzard, as the "supervillain" of the film, simply looks out of place in the whole scheme of things. He was obviously brought on as more of a prestige character actor, and he just does not look like he actually belongs in any of the scenes. Wanda Sykes plays another mouthy eccentric character, but after seeing her pull this same shtick in everything from her TV roles, to her work with Chris Rock, and even her animated roles in Barnyard and Over the Hedge, it is getting to be a bit overdone.

Rainn Wilson, as Matt's friend Vaughn, actually emerges fairly unscathed from the film as just about the only thing to continue watching for. He nails all of his jokes, and he just steps over everyone to become the best thing the movie has to offer. It was actually a joy to watch him show up on-screen, because no matter how ridiculously bad the situation in the film was, Wilson would still manage to inject some sort of saving grace.

On the whole, My Super Ex-Girlfriend is just one big mess of a movie. Even without touching on the shoddy special effects, it is clear from the moment the film starts that it will be a bumpy ride with very little to offer. Wilson delivers, as does a well done origin scene.

Review by DonFishies from the Internet Movie Database.