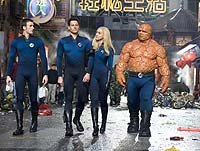 After the critics and comic-book aficionados gave the first Fantastic Four film a "bitchslap" of bad reviews, it became a surprise hit nonetheless. But some of you already knew there was going to be a sequel on the way. And since there were a lot of mistakes made, there must've been some lessons learnt from everyone involvednot that they could care less about "negative reception", since the movie has made 330 million worldwide. 2 years later, the promise that the sequel will be darker (so they say), and more serious (so they say), have been hype to death, though this is the same hype that has damaged both Spider-Man 3 and X3. Then, there's the publicity stills of the Silver Surfer as the next FF baddie, helping me leave my lowered expectations behind. I decided to give this one another shot, and that's because the Silver Surferwho is one of the coolest Marvel creations ever.

Rise of the Silver Surfer is an improvement over the first film (And that's saying a lot for those of you who have ever seen the first film), since its source material is a reasonable one. The Fantastic Four must save Earth after the Silver Surfer, who is the herald of the planet eating being Galactus, signals it's destructionwhile Mr. Fantastic and Invisible Woman prepare for their upcoming nuptials. Seems fair doesn't it? This could've worked, but the problem is that a brief 96 minutes running-time isn't enough to pull it all off. How are you going to pull off an "Independence Day" under 96 minutes? Not only is the running-time a huge problem, but the film is just too lackluster for me to fancy. And because of everything being so brief, arbitrary and perfunctory, there's wasn't enough action, fighting, or confrontational battles between the heroes & their foe(s). This is a film about an extraterrestrial being coming to destroy Earth, but you don't see too many things being blown up; devastation of landscapes or set pieces with an atmosphere filled with intensity, peril or panic: all of the things that can give this film a dramatic affect. Like the first FF film, FF2's suffers from a limited imagination, and I honestly think that Tim Story lacks the vision that it takes to handle such material that's supposed to be filled with thrills, excitement, darkness, drama, and for the faithfulness to the FF camplight-hearted "fun". The "over-hyped" nuptials of Mr. Fantastic and Invisible Woman turned out to be a disappointing subplot, due to the fact that it's just a set-up for the Surfer to have his first encounter with the heroes by intruding on the ceremony. Though I was hoping they could get it over withsince it has taken up most of the film's time; they have been yapping about it throughout the entire film. But thank god Stan Lee came to make his usual cameo appearance. Was it light-hearted? Yes. Seeing as how there's a goofy dance number with Reed Richards, and the typical slapstick momentswhich one scene includes Sue's body helplessly rendered in flames because of Johnny's molecules being unstable after his encounter with the Surfer, causing him to switch powers with anyone he touches. Was it funny? Nope. Chris Evans (Human TorchJohnny Storm) is typically "comedic relief" with all the dull-witted jokes he can carry, but tries to make it work with decent delivery. Michael Chiklis (Ben GrimmThe Thing) isn't given much to do here but stand behind and be the goofball.

The attempt at tenderness between Sue StormInvisible and Reed RichardsMr. Fantastic is unrealistic, with both the film's hackneyed script and the lack of chemistry between Jessica Alba and Ioan Gruffudd. Whenever these folks are supposed to kiss and show affection, it seems rather forced then natural. Alba (now looking like Lil' Kim with her blonde-hooker wig and scary-looking blue contact lenses), is just cold and uninteresting for me to stomach. It seems that she is always in this emotionless state. It's like she's this walking mannequin: she does nothing, but stand around, look hot, and wear tight-fitting outfitswhile wearing eye-glasses to give off the effect that she has some sort of intellectwithout the intellectual babble (doh!). The script does nothing to help her express her words, but she doesn't have the altitude to express emotion either. Gruffudd seems to always be in this state of lost. It's quite difficult to understand why such an amazingly gifted actor can be so boring in this film. Were any of the heroes fantastic this time? Not a chance. The Fantastic Four are treated are bland super-dummies, while their nemesis, the Silver Surfer, upstages all them in terms of awesomeness and coolness. Too bad this isn't his movie. The Silver Surfer rocked, no doubt about it, and brought to life by amazing special effects, he's even more fantastic then the four who carry the moniker. Do we really need Julian McMahon returning as Dr. Doom? People have truly underestimated him in the first film, but here, he doesn't provide much for the story, while the idea of the big bad-ass Galactus turning into a dust storm doesn't work.

My advice for the next installment

2.) Let these characters show their full potential when they perform their super-powers.

3.) Never let the next FF baddie cramp the heroes' style

4.) Enough with Doom 5.) And please upgrade on the special effects, they still look cheapeven for a big-budget film.

Of course, this is supposed to be a "light-hearted" family film, and like a Diet Coke it's "Half" the calories (PG folks)while the hardcore comic-book fans with avoid it like the plaque. They deserve better. And by the title being Fantastic Four: Rise of the Silver Surfer, it's really more about the Silver Surfer. In the good words of wisdom from Flava Flav: "Don't believe the hype.".

Review by TheDarkPhoenix85 from the Internet Movie Database.