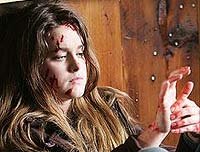 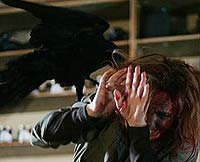 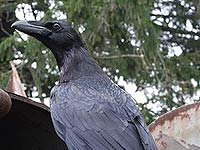 OK, let's take a look at "Kaw." First, it is a direct descendant of Alfred Hitchcocks "Birds", which is not a bad movie to clone, but "Kaw" seemed to act as though it lost interest right after it got started. I won't rehash what my fellow reviewer wrote, but there are a couple of things that are lacking in this film. I will buy the premise of a Sheriff in a small town of around 600 wanting to leave and I will buy the idea that his last day should be the pits, but here is what I view as some drawbacks to this film. Without giving anything away, I noticed in the beginning of the film, an Amish lady delivers milk and cheese to Betty played by Michelle Duquet at what else but Betty's Diner. Now you are probably wondering about the significance of this, but once you see the end of the movie and all is explained, you will wonder about this as well. One correction I would like to make that a fellow reviewer noted is that the bus was not full of children, but contained one bus driver played by Stephen McHattie, one girls basketball coach played by Amanda Brugel, one Whitney basketball girl played by Ashley Newbrough, one Amish girl played by Megan Park and one other girl played by Renessa Blitz. By my count there were 3 girls, 1 coach, and 1 driver for a total of 5 people, which is a far cry from a "bus load of children." On the return from the basketball clinic, the bus breaks down. At one point, Doris, the Whitney gal, decides to walk to town. The driver, Clyde, points toward the rear of the bus and tells her that town is four miles that way.

In order to be able to view this better, picture your TV and see the front of the bus pointing toward the right of your screen. The rear of the bus is to the left of your screen and to the left of your screen is their town. Question is, how come the bus is heading away from town when they are on their way back into town? Another odd thing is after Clyde tells Doris the way home, she walks right past him and continues in the wrong direction. A bit later, the Sheriff, Wayne, played by Sean Patrick Flanery, shows up from town and is heading in the same direction as the bus, which would confirm that the bus is heading in the wrong direction. During this time the light bar on the Ford Bronco gets broken, yet once he turns around and heads back toward town, the light bar is fine. The Sheriff and passengers are in a four wheel drive, full size Ford Bronco, yet when the highway to town turns into a muddy road, he gets the Bronco stuck in a corn field. Even for such a small town, you see a few folks in the diner for breakfast, but once breakfast is over, you don't see anyone, other than a kid on a bike toward the end of the movie.

To be fair there are two Amish men that appear, one is the father of Gretchen, who is on the bus.

One is at the Amish farm. There is of course the town doctor, played by Rod Taylor and Betty played by Michelle Duquet who owns the diner, which is a central place in the movie. And finally there is the wife of the Sheriff, played by Kristin Booth, who really has no purpose in the movie other than to get stuck in a well with a dead cow.

My final rating to this movie would be 6 stars out of 10. For the SciFi Channel, it was just an average movie that could have used a few more actors and a few less ravens. Worth watching once at least, but it doesn't make the cut when it comes to adding to my B_Movie collection.

Review by oldsarge-1 [IMDB 9 April 2007] from the Internet Movie Database.