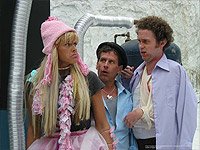 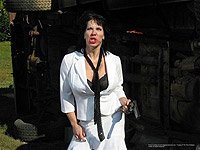 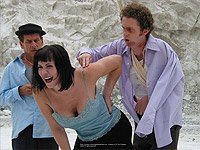 I have to say I honestly wasn't expecting much from this movie. I figured it would be a typical B-movie, direct to video and filled with bad acting and cheap production values. I was wrong. The special effects and action were surprisingly good, and I found this to be one of the funniest films I've seen in a long time.

Anna Nicole was absolutely adorable, and showed that she had a lot more comedic talent than people gave her credit for. When she was trying to do action movies, she was out of her element -she was made to do comedy, and it's a shame we will not get to see her talent develop. Because she had a lot of potential judging from this film. She was very cute in this.

Joanie Laurer was also deliciously evil in this film, in a screwball kind of way. I hope she makes more comedies as well -having only seen her on reality shows, I wasn't expecting someone so funny -just her tics and facial contortions were a scream. This movie is just plain fun!

As someone who enjoys films from directors like Preston Sturges and John Waters, I can only ask why Hollywood spends so much money to make films that aren't half this good or funny. Sometimes there's nothing like a wacky screwball comedy instead of some sophisticated overwritten psychobabble. To the cast and crew, thanks for making me laugh so hard. Illegal Aliens should keep me in stitches from laughing until John Waters graces us with another dose of funny. I also recommend Elvira's Haunted Hills for another great comedy that Hollywood didn't pick up on.

Review by stiv-4 from the Internet Movie Database.