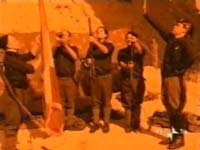 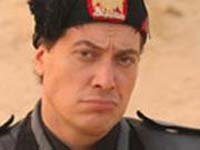 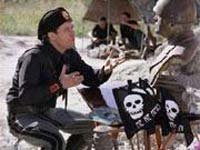 It's probably because I wasn't born in Italy that I'm not a huge fan of Italian comedy - in fact, apart from a few classics like Fantozzi (who got old as well) I hardly can stand today's so called "comedians" like De Sica or Boldi. Then what was I expecting from "Fascisti su Marte" (Fascists on Mars)? I liked the concept, and despite the fact that I've never seen the source material TV-show, I thought this could be entertaining. I couldn't be more right.

The concept is as simple as it gets - Fascists are sent to conquer Mars, but as always, only a bunch of people with little to no food or any resource are sent. The problems are many, caused not only by the lack of resources, but also because Mars has no air, no water, or no life whatsoever. Or does it? When the strange rock-resembling creatures that apparently say "mimimmi" appear, things turn out very differently, and what seemed to be an easy task in a place full of nothing but sand (a clear satire of the attack on Libia), turns out to be a matter of interests, whereas the "Duce" sure wouldn't let our heroes lose (also to mention that the 5 men are bringing around a bust of Mussolini himself).

When the war against inanimate objects isn't going on, the soldiers act as typical Italians - they laugh for bad jokes, they play soccer, they quarrel. But all this mindlessness causes trouble, which makes it necessary for the soldiers to create commissions, real politics in an otherwise anarchic situation - institutions as the MIN.CHI (which is a vulgar Italian pun), which in theory should make all easier, but in reality do not work at all (any resemblance with real history is unintended of course). Constant adoring of the Dux and typical Fascist behaviors of the protagonists force the viewer to know how Italian history went, because while the movie is fun for the situations itself, the funniest thing is the political and historical satire it makes - it even jokes on the war on terror in Iraq for example. But it also makes fun of movies like Schindler's List and 2001: A Space Odissey, so you'd better have a good general knowledge too.

We could say that an Italian film that ridiculizes the Italian (and not just that) history is very daring, especially when one-sided jokes clearly insult other countries (like England who were "still hunting beavers while we were already conquering"), and indeed Corrado Guzzanti (the director) made a great job, without caring of possible controversy (but then the source material is already around from a long time, so no trouble).

The actors, all knowable but none are very famous, are doing a great job, even the less important ones. In the last part of the movie many new actors appear as the story continues, but the level remains high. Also, congratulations for making a believable Mars scenario with such limited budget. I'd also mention that there's a small cartoon sketch on the "mimimmi", I don't know who drew that one, but it's pretty funny and well made. But then you shouldn't expect A pretty lenghty review with no bad sides? Not really. As I said, you need to know a lot about Italian history, and even better, you'd better be Italian to get this movie fully. There's just no way ANY translation could give this movie any justice, because you just can't "translate" the typical Italian behaviors. Also, if you could get offended by one-sided political and religion points of view, you'd better not watch this movie, because they're even making a hypothetical Fascists Madonna (extremely funny if offensive). In the end, this movie is extremely funny if you know what's so funny about it - but this is not your typical USA comedy with random jokes, so only watch this if you know a lot on Italian history and Italian culture.

Review by vittoriobaky from the Internet Movie Database.