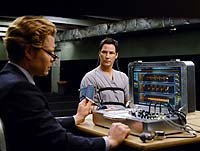 When I reviewed the original The Day the Earth Stood Still, I said that someone ought to remake it because as good as the original is, any picture over half a century old is going to have a dated quality to it. The basic story of that first film, however, deserves to be retold in ways that new audiences can better appreciate. But while almost everything about this remake will be more palatable to modern audiences than the black-and-white classic, they forgot to include the basic story that made the original worth being remade.

Both films have the same beginning. An space craft lands on Earth and an alien named Klaatu (Keanu Reeves) emerges, only to get shot just a few steps outside his ship. That brings out a giant robot who starts attacking the surrounding authorities until Klaatu orders him to stop. Klaatu is taken into custody and his wound is healed, then he announces that he has a message for the leaders of the world. He isn't able to give that message and escapes from custody, this time with the assistance of Helen Benson (Jennifer Connelly), one of the scientists gathered in response to the approaching spacecraft. As the U.S. military and law enforcement tries to find Klaatu and figure out what to do with his giant robot, Helen and her step-son Jacob (Jaden Smith) discover that when Klaatu says he's here to save the Earth, that's doesn't necessarily mean he's here to save humanity.

The fundamental thing to know about this remake of The Day the Earth Stood Still is that at every point where the original film was smart and bold, this movie is dumb and cowardly. You shouldn't be confused because this remake deals with certain elements of the story in more realistic detail. That's just window dressing. If you pay attention, you'll realize that this film only pretends to have a message and a real point of view.

Firstly, this movie doesn't specify precisely what the problem is with Mankind. It's supposed to be some sort of environmental message. Klaatu does talk about how humans are killing the planet...but he never says exactly how we're doing that. Is the problem global warming? Overpopulation? The genetic modification of animals and plants? Resource depletion? The original film showed the audience what human thinking and behavior it found problematic. The remake just generically classifies humans as bad. I suppose if you already consider other people a blight on the Earth, that lack of specificity won't bother you. But by not delineating what human action is so terrible that Man needs to be wiped out, there's no teeth in 2008 Klaatu's denunciations of humanity. Because it's so vague, you can't take the condemnation personally, which takes away from any emotional investment you can have in the story.

Secondly, this remake never really deals with what sort of changes should be made in the world. Other than a rudimentary "Be nicer to Mother Earth" attitude, this story never really offers up an alternative to the way things are. The first film very clearly stated "If humans stop doing X and start doing Y, we'll deserve to survive". This film says "Humans deserve to survive because...well, because a stepmother and a stepson love each other". I'm not kidding. It justifies the continued existence of Mankind by the fact that human beings care for one another. That sort of namby pamby, undefined rationale has no emotional impact. It's nice and all that Helen and Jacob are brought together over this crisis but if you're going to question humanity's right to exist, you need to come up with something bigger than that personal drama.

As far as the acting goes, Keanu Reeves is quite good. Some might say that playing an alien in human form didn't require much acting from him, but he has an ability to put up this wooden front while letting us see little glimmers of what's going on behind. Jennifer Connelly doesn't do anything exceptional with her role, but she does well in showing us Helen's struggles in relating to her resentful stepson. Jaden Smith has the presence of an actor, but he's not one of those freakish prodigies like Dakota Fanning or Haley Joel Osment. There's nothing wrong with his performance but there's no real depth to it, which you shouldn't really expect from a normal kid his age.

The movie doesn't have quite as many special effects as a lot of big budget spectaculars, but it does try and show you something different than the explosion-o-ramas these films normally are. I'm not impressed by any of it, but I'm not impressed by modern effects in general. I know computers can now create virtually anything on screen, and I can't be awed by anything concocted by a bunch of computer nerds between sessions playing World of Warcraft. Now that these effects are nothing more than lines of code, I can't take them seriously.

The remake of The Day the Earth Stood Still isn't a bad film. It's just too dumb and too wishy washy for the subject matter of this story. If you've never seen the original and don't plan on seeing it, you might enjoy the remake. But if you ever compare the new version with the classic, I don't see how you can't come away disappointed.