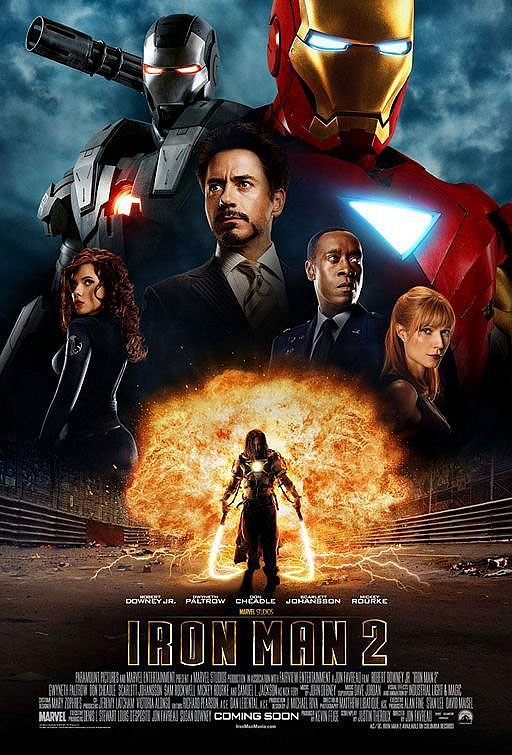 Comes to movie screens the long-awaited sequel to one of the best superhero movies of all time. Although not present more innovations and have that freshness in the air of novelty, the superhero continues to surprise further intensifying the relations of his characters amid good action scenes.

Unfortunately the major flaw this sequence is that it does not innovate in relation to the first, just repeats the formula of the original, with the effects and technical finesse are even better. Robert Downey Jr. once again dominates the screen with Tony Stark supporting and appear well. It is interesting to show the threats suffered by Stark in this sequence: problems with disease caused by the use of armor superhero, the conflict against the U.S. government, without talking in very grotesque villain played by Mickey Rourke on the big screen.

The screenwriter Justin Theroux to have performed the comedy "Tropic Thunder", entered many catch phrases and dialogues with much humor, sarcasm favoring even more especially applied to Stark. It's great the way Jon Favreau and screenwriter Justin Theroux concatenate the connections between the characters and their pasts. The two new villains, Vanko and Hammer are totally anti-Tony Starks, forged from the same cast of heroes, in the best tradition of Marvel Comics. The action scenes are good but very "lying", but not something that you take the merit of the film. Favreau's direction is more focused on the characters than on action. The exaggerated scenes are few, and some deserve comment. The scene at the track racing in Monaco that appears Whip Black are spectacular and shows that he can actually be the one to represent a threat.

We highlight the struggle of Black Widow with security that is graphically amazing and exciting - a shame that beyond this fight scene no more scenes in which the character appeared most prominently, but the Black Widow presented is cold and calculating, causing identifying who already know the character, not to mention physically and red hair characterization also does an excellent job. Also during the final scenes, the fight between Iron Man and War Machine against the Black Whip could be much better utilized. Until now we have to understand the reason for the fight have little time with the villain being eliminated very quickly. There was to be an epic moment of the film sensational confrontation and fell well short and disappoint.

Robert Downey Jr. is clearly more comfortable in the skin of Stark again and steals the scenes in which is all the time. Again the comedic talent and wit of the actor and his obvious charisma deliver a character that was supposed to be annoying, arrogant and endowed with self-destructive behavior, one of the most beloved characters of today.

The chemistry between Mickey Rourke and Sam Rockwell is great, resulting in truly funny moments. Even with Rourke's character having an essentially dramatic motivation, it becomes not only grim, making the balance between evil villain and intimidating with the spirit sarcastic and not afraid of their opponents, a wise decision on building character. The Black Whip interpreted by him is a mix of villains Crimson Dynamo and Whiplash own, which had some identities and the first was Ivan's father, Anton Vanko, who appears at the beginning of the film dying in his son's arms. Then came the specialty in electricity control. In the film, Whip Black Whiplash has the name and nationality of Crimson Dynamo in the comics. Don Cheadle replaces Terrence Howard as Rhodes with competence. In the female cast, Gwyneth Paltrow and Scarlett Johansson does not have the screen time they deserve, but still has good scenes.

The soundtrack of John Debney, who had worked with Jon Favreau on Zathura and who also signed the soundtrack plots as Sin City, dreamy and Hannah Montana - The Movie, is another high point and makes us vibrate in moments of action. The music track once again show the touch of rocker adventures and we can enjoy for example, "Shoot to Thrill" and "Highway to Hell", both AC DC, among others.

The references to the movie "The Avengers" are also a bit more punch with appearances by Nick Fury, who makes this is an important step towards the future Avengers movie - the reappearance of Agent Coulson and the connection made especially with the film Thor is quoting the phrase you're going to New Mexico to investigate something and culminates in the post-credit scene of the film. Undoubtedly for fans of Marvel scenes are a great appetizer for what lies ahead. Compared to the first film, we can not say that this does not have its merits, but it lacked something. Maybe he missed a story more elaborate, with more conflict and action scenes better distributed and best enjoyed over two hours. Technical requirement in the movie is perfect and knew Jon Favreau once again lead the story well, even gaining more prominence as an actor with his character in this film gaining more space in a good sequence in which he is the Black Widow. Another factor is the pace that has more ups and downs than the previous adventure, improving over the last forty minutes from long. It is undeniable that the film is pure fun of the highest quality. Iron Man certainly not rusted and still has much to be tapped in future sequences! Bring on Iron Man 3 and hopefully Shane Black has the same responsibility toward that Favreau had these first two episodes of the franchise.

Review by Fernando Schiavi from the Internet Movie Database.