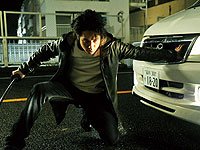 Like Hollywood, Japan has its fair share of films adapted from the manga / graphic novel medium, and the first Gantz film showed what I had missed out. While being self-contained to a certain extent with the final scene leaving the door wide open for a follow up film, Gantz The Perfect Answer served up the concluding companion episode that's relatively different in tone and treatment, with the first film being that special effects extravaganza of a science fiction mystery that took its time to explain the rules of engagement to the audience, and this one being more measured in pace to explore and deepen the relationships between characters.

So for those who had come to expect an all out fight fest between the Gantz warriors and what was the myriad of alien lifeforms introduced in the previous film, this one had limited set action pieces to thrill you, with a consistent enemy solely being the shape shifting "Men in Black" aliens, extremely difficult to get rid of and who can forge weapons out of thin air. But that didn't mean the action got dumbed down, on the contrary they just become bigger scaled, and complex, especially the subway sequence involving different teams up against persistent enemies, weaving into and out of a speeding subway train using a whole host of weapons and strategies rolled into one.

The other action sequences didn't offer anything not seen before since it involved the usual hunter-prey type chases, although a three way street swordfight upped the ante before the all out whack fest as the finale that called too much attention to itself due to the fact that common sense logic gave way to wanting to achieve cool framing. There will be moments in the film that will make you wonder about continuity and inconsistencies especially to the ground rules drawn up, and the effects, outcomes and aftermath of weapon inflicted damages, but I can probably explain it away with Gantz getting weaker as the story goes along, and with that introduce the inconsistencies spotted, and the unpredictability of entire scenarios since for the first time, the "real world" people get put in direct line of fire.

And with the introduction setting Kei Kurono (Kazunari Ninomiya) achieving close to 100 points would already have done away with any montage sequence to show him and the Gantz squad dispatching countless of aliens along the 5 month duration set in the film, in lieu of wanting to explore the more human emotions and relationships between Kei and his best girl pal Tae (Yuriko Yoshitaka), and that between Masaru Kato (Kenichi Matsuyama) and his brother Ayumu (Kensuke Chisaka) who is yearning for the day he gets back home, which Kei is trying his best to assist in clocking his first 100 and trading those points for a resurrection. Then there's the love story between Kei and Tae that forms the centrestage of the plot here, like any typical love story where the guy stands up and protects his loved one from adversity, only to find the odds unfairly stacked against him because of the nature of the set up and game formed by Gantz.

On a deeper level, this film touches on how humans tend to fight without knowing intrinsically what they are fighting for, other than for the promise of something that obviously won't be delivered upon one's demise, or purely for selfish, personal gain that can easily turn allies into foes, and what it means to be selfless. The finale while dragged out, is bound to leave one nodding in appreciation just how it goes back to its science fiction roots in order to complete the film, and in some ways cutting close to the Matrix on levels dealing with the formation of realities, though here done with a little bit more finesse with bittersweetness.

As an expansion to the two film mythos, some familiar faces get to come back for a second round having form a formidable team with Kei Kurono, while new faces are being added such as the model Eriko Ayukawa (Ayumi Ito) who goes about in a hypnotic trance to help Gantz, and cop Masamitsu Shigeta (Takayuki Yamada) who is hell bent on finding out the truth behind Gantz and the whereabouts of the urban legend but always finding himself one step behind. The other Gantz members who get featured in this installment, though some briefly, suggests how one gets trapped in a loop or are at the beck and call of Gantz, and raises questions specifically on the kind of freedom granted by the black orb, which puts on that perfect philosophical and science fiction mash up spin.

For those who have forgotten the details from the first film since it has been months, fret not as this installment begins with a quick, broad recap of the pertinent points, then launching itself proper into the scheme of things that will call for patience in the initial act before its first action sequence kicks in, and kicks into high gear all the way to the finale. Definitely recommended for fans of the first film, and for the curious, do pick up the DVD of Gantz first before heading to the cinemas to complete the tale.

Review by helmutty [IMDB 23 August 2011] from the Internet Movie Database.