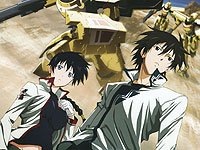 Based on Yoshinaga Yunosuke's robot manga of the same name, this theatrical anime depicts the hapless fate of four individuals who first met at a military academy. In the fourth installment of the six-part series, the armies of the two countries at odds collide.