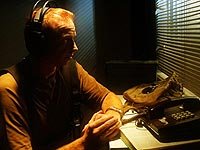 Alien Encounter film was super wild...I must admit I dug this sleek & cool Sci-Fi Thriller. The film is based on true events of the Phoenix Lights UFO sightings in Arizona. It was cool on all levels! The effects were surreal, the music was wild, and acting was realistic. It had well known actor Courtney Gains from Stephen King Children Of The Corn film. And the super hot ActressSupermodel Yvette Rachelle kept me more than intrigued while Matt Mercer of film Contracted was convincing. Not to mention there are aliens in the film and a wild ending. An enjoyable watch overall and now one of my favorite Sci-Fi Films along with Aliens & Close Encounters of the 3rd Kind.

Review by ecomann2000 from the Internet Movie Database.