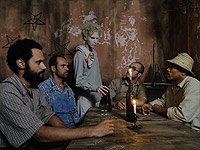 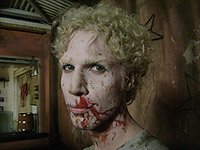 Very nice bloody Brazilian independent horror film. It comes from a region in the country (Espírito Santo state) which does not use to produce movies. It is very well filmed, in spite of the low budget. The traditional family struggle is interesting, there are some nice dialogs, and acting is far from brilliant but is not bad either. I also liked the Chupacabras ("goat-sucker"), the vampire-like monster that drinks the blood of animals... and of humans. The old sack man ("velho do saco") is even creepier, extremely disturbing, and could have been better used in the story. Besides him, my favorite characters are the two mothers and the Silva father. If there were not the exploitation footage full of spouting blood and green vomiting, the film would be even better. The unrealistic reaction of many characters, particularly in Carvalho family, to the dire slaughtering is another drawback that I shall mention.

Review by guisreis from the Internet Movie Database.